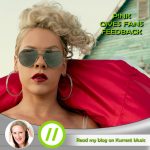 Written for Kurrent Music Published November 3rd 2017 While I’ve been blogging in these past two years, I’ve also been promoting my Kurrent Music blogs on social media. Every once in awhile, I’ll see a little hint of my blogs… Read on 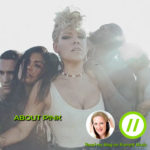 Written for Kurrent Music Published August 11th 2017 P!nk is back. Those three words have made my week. 🙂 Her new song, “What About Us”, picks up where we left off. There are no surprises. No new look, not a different… Read on 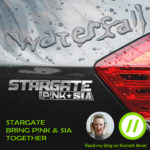 Written for Kurrent Music Published on April 15th 2017 Some collaboration throw you back at first sight. They just seem slightly odd. This was my initial reaction when I heard about a collaboration between P!nk, Sia and Norwegian dance producers… Read on 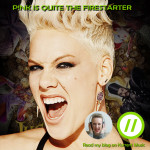 Written for Kurrent Music Published on April 17th 2016  Earlier this year, it was announced that P!NK would be recording for Disney´s Alice Through The Looking Glass movie. Along with the announcement a video was released showing P!nk recording some… Read on 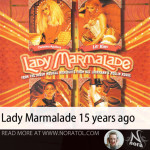 Today, 15 years ago, the song “Lady Marmalade” was released in the version of Pink, Mya, Christina Aguilera and Lil’ Kim. Also featuring Missy Elliott, who produced the song together with Rockwilder. In many countries, it was the third time… Read on 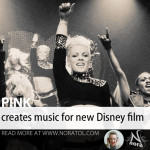 Published February 16th 2016 Pink has been asked to write songs for the Disney movie Alice Through The Looking Glass. The film is expected to hit theatres on May 27th, 2016 and features Johnny Depp, Anne Hathaway and Helena Bonham… Read on 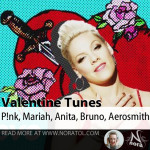 Published February 14th 2016 In honor of  it being Valentine’s Day today, I’m sharing my list of what I consider to be great songs love songs. Mariah Carey – Vision Of Love For a while, Mariah Carey was the queen… Read on

Published December 2nd 2015 At first glance, you might not think of pop rock singer Pink to be a spokeswoman for a charity, but Pink has just been named the new ambassador for UNICEF. A trip with the organisation to… Read on While rumors have been popping up everywhere, about her being busy recording a new album, she’s been mums the word about that. But, it is a fact that she has recorded the new theme tune for The Ellen DeGeneres Show. It’s her first new music in three years.

The track is called ‘Today’s The Day’ and has not only been released digitally, but has also been hitting the radio stations. I’m very happy about that, because in all honesty, who can resist a personal anthem like this song anyway?!

Exactly 15 years ago, the pop scene was dominated by teen stars Britney Spears and Christina Aguilera. The pop world was in need of a woman with a little more edge. And just when she could only be found in… Read on