Kylie Minogue takes her album, “Golden”, all around the world. Last week, she stopped by in AFAS live in Amsterdam and, of course, I had to see her. 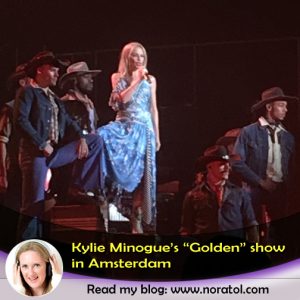 It’s been some time since Kylie performed in Amsterdam. The last tours all skipped The Netherlands and so, I missed those. It was high time to step back into her world, even though I knew that world in the golden era was going to be slightly different this time.

Kylie Glitters In A Smaller Production

In a Kylie concert anything can happen. She pulls out all the stops. There are dancers, crazy outfits (usually for the dancers), great video visuals and a completely rearranged version of “The Locomotion.” OK, so this tour still has most of that. However, it feels like a smaller production. The sparkle is replaced by something more intimate.

It seems a bit out of character to see her standing on suitcases singing a few tunes. It almost feels like she’s sitting on a porch with friends at some Texas farm. However, that’s exactly what she does on this tour.

A Salute To American Culture

She’s rollin’ on the success of her album “Golden”. It mixes country with dance, 70s rock with pop and a lot of personal nostalgia. So, this tour is nothing futuristic nor does it take influences from Greek mythology, like before. Instead, the show takes us into some gritty American culture. 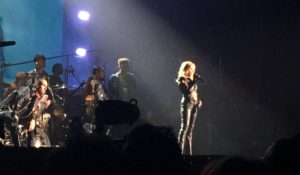 The video back drops are simplified compared to other tours. They are mainly used to set a scene, like a bar or a desert. The outfits are only crazy once – mainly for the dancers – but you can tell most of the show is inspired by Dolly Parton, Elvis Presley and she performs a captivating version of “Slow” as a biker chick. Believe me, just walking and pausing and singing a slower version of “Slow” is all Kylie needs to captivate an audience.

However, don’t make the mistake to think the show hasn’t got any energy to it. Kylie herself hasn’t slowed down at all. In fact, I’ve not seen her dance this much in any of the shows in this millennium. 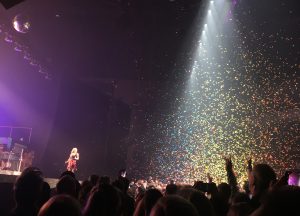 A Kylie show is always a party

Even though the tour intends to support the album, “Golden”, she’s performed many of her classic golden oldies. I loved, loved, loved the version she performed of “Confide In Me”. This is already one of my favorite Kylie songs, but this time, she’s put even more power in it.

She also performed “Better The Devil You Know”, “I Wouldn’t Change A Thing/I’ll Still Be Loving You”, “Kids”, “I Should Be So Lucky”, “Especially For You” and “Can’t Get You Out Of My Head”, among others. And “The Locomotion” gets a Chic makeover. Disco galore.

For fans like me, the outfits and visuals are jam-packed with references to us “lovers”, but I found it interesting that she didn’t sing “Sincerely Yours” in this show; the song is like her personal letter to her fans. But it’s all forgiven. Despite this show being different from the others, I loved the concert from start to finish. Catch it if you still can. 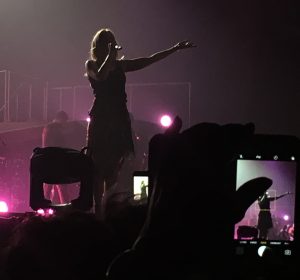