Hans Klok and his House Of Horror 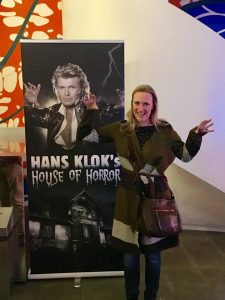 Nora Tol at Hans Klok’s final tour in The Netherlands

Illusionist Hans Klok takes his farewell tour across his homeland, The Netherlands, before taking his magic to Las Vegas (again). I’ve visited his House Of Horror and it was quite the experience.

Up Close to the Magic of Hans Klok

I’ve been to a few magic shows before, but seated at row 6 was something slightly nerve wracking. Being within view range means you could be picked to participate. After all, Hans is known for his quick vanishing acts. People appear and reappear within a matter of seconds. You never know what could happen to you! Luckily, Hans only picked men and children from the audience, who all had a great story to tell afterwards.

I was intrigued to see how he was going to fill up a full evening of entertainment. He masters other illusions as well and, yes, even pulled a (stuffed) rabbit out of a hat, but his main act is to vanish. Oh, wait, that sounds weird, creepy even, much like the theme of his show. Eeek!

The horror theme is a marriage made in heaven with illusions, but to offer some variation, Hans takes his show beyond his own magic. The show features short acts from other artists that are  entwined with his. All within the storyline of the House Of Horror. This was a lovely surprise for me. It brought back lots of memories of other shows I’ve seen and that one time I went to the circus. Oh yes, that happened! 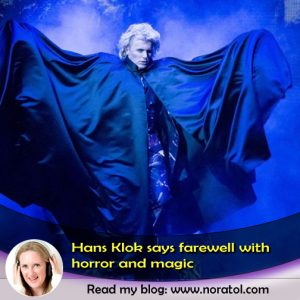 Hans Klok at his House of Horror show

Altogether, his show is very surprising and it’s clear why he’s the most popular illusionist The Netherlands has to offer.

When you enter the House of Horror, Hans will not only act as the leading man in the story, but is also the narrator.

During the show, he tries to get his hands on a book with all the tricks of a deceased master illusionist. Along the way, all kinds of weird, but mainly great and unexplainable things happen.

All A Mystery To Me

Despite being seated so close to the action, I really can’t tell you how he did anything. Everytime I thought maybe someone is hiding in a certain region of the prop, a knife would get jammed through it or he would wave his hand through it, showing the area is really empty. I just have no idea how people appear and reappear within the blink of an eye.

The storyline of the show is clear and easy to follow, though there is some uncertainty on my part about one thing. There’s a woman in it who reminded me of the movie Maleficent. I thought she was a mean character, but she also helps him, so maybe that is all in my head.

When it comes to the other acts, I’m amazed by either the strength they’ve showed – carrying others and creating amazing shapes – or their flexibility. However, it’s only natural for me, with my love of dance music, to also be drawn to the laser man, who performed a dance act with amazing laser effects.

Whatever Happens In Vegas…

Hans takes his magic to Las Vegas. It’s the second time he’s going there, but this time around, he plans to stay there for 10 years. I think that gives him enough time to really build up quite a nice reputation there.

If I’d be really critical, I think his show needs to get even more perfected for Las Vegas, but I’m really thinking about fine tuning. I’ve only seen high end entertainment on the Vegas Strip, so far. The bar is raised high there, from what I’ve seen. However, there’s a lot of entertainment throughout Vegas and I have no idea if he’ll be performing at a prime location. I do know that Vegas should prepare to be amazed.