Home » Music blogs » Robin Thicke Still Has Classics In Him

Robin Thicke Still Has Classics In Him

After “Blurred Lines”, I thought Robin kind of lost his way. No matter where he is in life, his music rarely seems to really suffer. His career, however, knows ups and downs. I, too, rarely listened to anything he produced after that. However, last week, I noticed some other music bloggers getting pretty excited about his latest single, “That’s What Love Can Do”.

Listen to Robin Thicke
Keep up with Robin 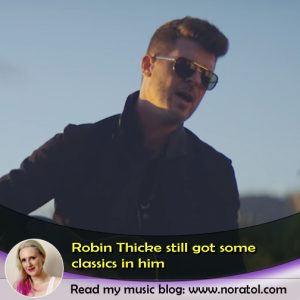 A New Start For Robin Thicke

Robin is in a much different state now, than when “Blurred Lines” was big. His party ways seem to have settled. His dad passed away, in the meantime, and the much discussed “Blurred Lines” copyright infringement case looks like it’s coming to its final end. It will probably cost him more than the song got him, but he has moved on and entered a time with something better to focus on. For him, this year started with more nappies to change, as he’s just become a dad of his third child and he’s engaged to be married. Yep, he’s come a long way from being that long haired care free kid in the video of “When I Get You Alone”.

In his previous single, “Testify”, he was looking back to the rough couple of years he’s exiting, and promised better. “That’s What Love Can Do” takes it a step further. It’s a sign of real personal growth as it reflects on the good changes that have come since and what motivated those changes. The lyrics are open to interpretation, of course, but jump between various kinds of love. Man to woman. Father to child. Very relatable.

Despite understanding the personal meaning of the song to Robin’s personal life, it’s that old school soul sound that makes this song stand out from other current releases. Robin’s signature falsetto is widely represented in the track, but the voice change in the bridge (somewhat around the 2.30 mark of the song) is what blows me away even further. It’s almost like another singer is entering the track there. Personally, I like this progression in his songs where he’s moving away from just partying.

Keep Up With Robin