Jagged Edge have a great legacy to live up to each time they release a new song. Does “Closest Thing To Perfect” meet that expectation? 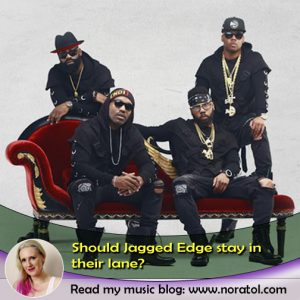 A while ago, I saved a screenshot of a tweet from r&b group Jagged Edge. They announced an upcoming single called “Closest Thing To Perfect”. It took quite some time before a follow up was posted, but the song finally was released, at the beginning of this month. It got slayed by critics for sounding too contemporary and lacking originality. Most r&b music bloggers were pretty clear. They want the throwback sound.

They’ve Got Some Years Behind Them

Jagged Edge are one of the few r&b groups from the heyday of 90s r&b, who’ve actually stayed together all these years. There were no line-up changes and the group has consistently released music since 1997. Their success had its ups and downs, though, even leading to their very own episode of an Unsung documentary.

With all these years behind them, I was expecting “Closest Thing To Perfect” to be better than it was. Following up on their last album, “Layover”, the group continued experimenting with current hip hop sounds, auto tune and trap influences. In fact, on this track, it’s kind of replaced the harmonies that gave Jagged Edge, well, their edge!

The reason why I love their classic “He Can’t Love U” is the vocal delivery of the chorus. It’s determined and strong. This is nowhere to be find in “Closest Thing To Perfect”. Instead the song is a mix between some singing and rap-singing, by lack of a better description. I’m referring to lines in the chorus, like “devoting these two verses, she’s the closest thing to perfect”.

Other bloggers seem to mainly be disappointed with the groups musical direction and updated sound. While this song might not be the best of releases (and every artist has good, bad and great tracks), that updated sound was actually the main reason why Jagged Edge were on my list of blog topics this week.

Stay In Your Lane Or Compromise?

This group has been around for a long time. They are creative and I can imagine they want to experiment and grow within their art, especially when so much change has happened within their genre. As you know, I applaud artists who don’t just repeat their success formula. Jagged Edge took a risk and it’s clear the new sound is taking some getting used to by old school r&b fans, who want them to stay in their lane. The challenge for Jagged Edge is that the new sound does not uphold to the stuff the current r&b fans are listening to either. They are still working on their new album. Maybe it’s time to find a compromise and deliver an album with a little bit of both.

Keep up with Jagged Edge