Three Years In The Life Of Davina Michelle

Imagine, you post some cover songs on YouTube. Then the original artist watches it and says  someone needs to “sign you quick”. This is the story of Davina Michelle.

Listen to Davina
Keep up with Davina Michelle 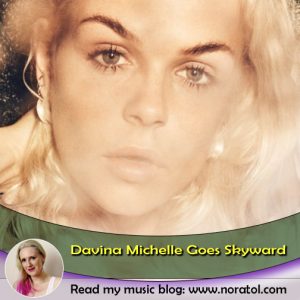 Davina Michelle’s singing awed me, on several separate occasions. However, I never linked them to one and the same person.

A few years ago, P!nk was asked to provide feedback on people who sang her songs. In the video, posted by Glamour magazine, Davina Michelle sang “What About Us”. At the time, Davina was just a simple Dutch YouTube cover singer. Pink was blown away, so was I. I even checked out her full cover of the song. Then, I forgot all about it.

Somewhere in 2018, I heard a Dutch song on a local radio station about a tug n war type relationship. The track was an interesting blend of story telling and singing. It stood out so much, I thought about using it for one of my music blogs, despite the song being in Dutch. Later, the song hit number one in the Dutch charts. I found out it was taken from a TV performance. In the show,  professional singers cover each other’s songs. The original version was a rap song. Hence, the story telling angle.

It also led to her winning an award for best newcomer.

Around the same time, friends of mine told me this story of a girl, who got discovered by Pink on YouTube. She’ll now open for Pink in Holland on her current tour. Yep, this is all the story of Davina Michelle.

Between Covers And Originals

She’s a prime example of what can happen in just three years. Originally, Michelle Hoogendoorn (her real name), appeared on the talent show Idols in 2016, before starting her YouTube covers in 2017. Her covers always attracted a lot of viewers, but the Pink feedback pushed it further.

Between her covers, she’s released original songs. I’ve seen so many cover singers on YouTube struggle to get away from cover songs and get their own music noticed. It’s only logical. Literally. YouTube’s search algorithm make it easier for people to find cover songs, than it is for new songs to get noticed. However, with 500,000+ subscribers signed to her channel and the regular press coverage, Davina has no problem reaching and engaging a big audience on the platform.

After all the success of her number one hit single, and the announcement of her supporting Pink in Holland, it’s no surprise that all eyes are on her. Anticipation was high for the release of her follow up single, “Skyward”. It was released last week, followed by the video this week. “Skyward” is a power pop song that showcases her big voice and Jessie J like ad lib skills. Davina and boyfriend Sebastiaan wrote the empowering lyrics full of encouragement to aim high.

Keep up with Davina