Keith Sweat Swings Right Back Around

Keith Sweat succeeds where other have failed. He’s delivered a cross over album that actually works. His latest single from it reached the number one spot in the Billboard Adult R&B chart with ease.

Listen to Keith Sweat
Keep up with Keith 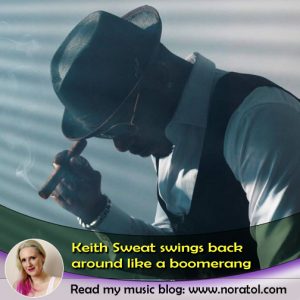 Keith Sweat on the album cover

His album, “Playing For Keeps” is not a cross over from one genre to another, but it’s built a bridge from classic r&b to modern r&b. Like many 90s r&b fans, I run into trouble connecting to modern r&b. For the record, this is not to say that current r&b is bad – not at all! Sometimes, I just miss the elements that attracted me to the genre in the first place. Enter “Playing For Keeps”, an album with the right amount of old mixed with the new.

Keith’s hit single, “Boomerang”, is a great example of that. Candace Price’s parts are sung in today’s rhythmic landscape; lots of words in a measure – inherited from hip hop. However, Keith’s parts are laidback and reminiscent of classic vocal melodies. Put together, it’s a blend I can get into.

Nevertheless, don’t think that Keith stayed away from any of the modern lyrical delivery. On this album, he shows he can still rock among the biggest stars today. Tracks like “Eney Meeny Miny Moe”, “Get Up In It” and “Fuego” show that he’s moved with his time, but “Cloud 9”, “Red Negligee” and “Bae Bae” bring in the smoothness. While a lot of songs are sexy and sexual, his collaboration with K-Ci is actually a simple love song. Clearly, bad boys grow up.

Besides, K-Ci the album also features collaborations with r&b legends like Tank and Teddy Riley, who also co-wrote a few tracks on the album. Additionally, the mix of sub genres and styles give this album the dynamics that makes it exciting to listen to. Clearly, Keith is not slowing down and is seriously playing for keeps.

Keep up with Keith