Hind reinvents herself as Laroussi

With her latest song, “Lost”, Hind starts a new phase in her music career from a different location, with a new production team, a new sound and a new name. Well, sort of…

Listen to Laroussi
Keep up with Laroussi 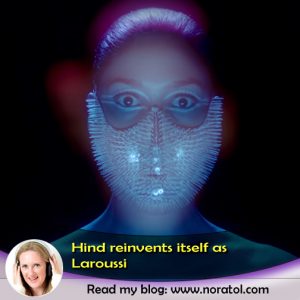 Crossing Over From Hind To Laroussi

Singer Hind is one of the few Dutch singers with a clear vision about her music. Like many, we got introduced to her via TV talent shows. After, she used her reach to introduce a mix of her Arabic roots with mainstream music, like pop and r&b. She saw herself as the cross over artist developing a market for a new fusion genre. With her third album, this genre was called crosspop.

She stood out, won awards and represented The Netherlands at the Eurovision Song Contest of 2008 (see below).

In a big chunk of her career, she’s been an independent artist. One, with a dream support of her fan base! Her fans crowdfunded one of her albums and the promotion of it. In fact, the platform she used to crowdfund on had never seen an artist raise money so quickly.

About 3 or 4 years ago – after her high profiled, high society, relationship ended – the press and her everyday people changed towards her. By then, Philip Lawrence (production partner of Bruno Mars) had discovered her and wanted to work with her. With the support of a few investors, she left for Los Angeles. The location isn’t the only thing she changed. Hind is now working under her last name only – Laroussi. A clever move for a new step in her international career. 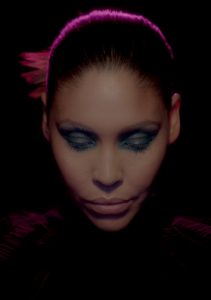 Laroussi in the video “Lost”

In her new single, “Lost”, she speaks of finding yourself, but still experiencing moments of feeling lost. The track still mixes a little bit of an eclectic sound with pop, but this time around it’s more polished and merged. Therefore, it feels more cohesive and less forced as some of her old material. You might even argue whether she moved a little more to a commercial sound, but I would dispute that. It’s not like this as catchy and dripping in commerce as a Bruno Mars song. I would say it’s got a little more finesse (pun intended).

Chris Cox created a cool dance remix of the song, which has just been released on the January 16th. He’s remixed for the likes of Madonna and Janet Jackson. Rumor has it, he’ll be remixing more of her upcoming releases. “Lost” is the first new music we get to hear since 2015.

The official video shows a truly matured Laroussi. I’d almost want to add the word “finally”. She always was a smiley, girlie girl artist. However, she now makes place for an experimental artist that plays around with visual images, movements and fashion. It gives the video an artsy and mysterious feel and her more artistry. I can understand how the layering of images links to the meaning of the song.

Taking Aim At The US Market

The production team is lead by Philip Lawrence and Davy Nathan (known for working with Toni Braxton, among others). Other music producers working with them, including some more of Bruno’s production team, reveal a mix of experience within pop, (neo-)soul, r&b and hip hop. Basically, we could expect anything from her now.

She’s also retained top-notch people to work on her dance skills and vocal abilities. It all looks like a well thought-out aim to break America, with “Lost” introducing her there. Fully focused as always.

Keep Up With Laroussi