Home » Music blogs » Allie Sherlock Is One To Watch

Allie Sherlock Is One To Watch

Teen singing sensation Allie Sherlock is back at busking, but it’s not what it looks like!

Listen to Allie Sherlock
Keep up with Allie 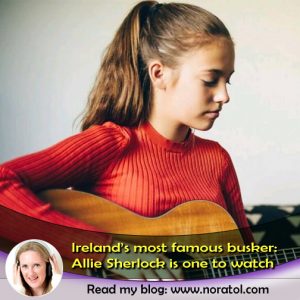 Allie Sherlock kept playing guitar once she picked it up

Allie Sherlock On The Streets

Last year, after visiting Paris, I wrote a blog travel tips about the city. I felt strongly to suggest to really keep an ear out for music when you’re walking around. There are so many good musicians and good singers sharing their talent through busking. I’ve not yet been to Ireland at all to roam the streets there, but YouTube offered me a glance at the talent it holds. This is how I spotted a young Allie Sherlock.

Once Allie Sherlock picked up a guitar, just about 5 years ago, she found her passion. Her dad took her around the country busking, singing and playing the guitar. With a strong voice and wide variety of songs, Allie stands out, especially for her age. Besides, there’s something really endearing about a normal girl – not yet revamped to the music business image standards – sharing her talent like this. Now, she’s aged 13 and well on her way to a serious music career.

Gather Around And Give Supermarket Flowers

It’s easy to ignore talent playing the streets, but there are some real hidden gems out there. As much as the street artists need the money given, success there can be measured by the same thing as their famous counterparts: The size of the crowd watching. Allie gathers a crowd – A tell tale sign no. 1 that something special is happening there. That crowd got much bigger online, once her street performance of Ed Sheeran’s “Supermarket Flowers” went viral. Over 8 million people have seen it and it’s announced as the third most popular video on YouTube over 2018!

Since, most of her videos received a few million views. However,  that Ed Sheeran song was life changing for the young singer. Ryan Tedder, One Republic’s lead singer, also saw the video. He signed her for five years and three albums. There’s no doubt then, that new, original music will follow up her first album, an independent release from 2017 that showed promise, but room for growth vocally.

Ryan is a prolific songwriter and pop producer, who’s created some of the biggest hits for various artists. The deal was announced on Ellen, exactly a year ago, where Allie talked about her viral video.

Back To Where She Started

Allie kept everyone talking about her the whole year of 2018 through. Various press have covered her story, as it unfolds. She’s definitely one of the most famous street musicians of Ireland. Still, despite Allie posting a series of videos of Ryan and her recording together, she’s back at busking since December 2018. Don’t worry, it’s not what it looks like! She’s just returning to her roots for a bit. The next step of her musical development and her career are just a matter of time. Going on her cryptic messages on her Facebook page, we’ll probably hear more of her this year.

Keep Up With Allie