Dotan originally broke through with a song about “Home”, but found himself a long way away from home when a scandal broke about his social media use. Despite it being a long road, Dotan did find his way home.

Listen to Dotan
Keep up with Dotan 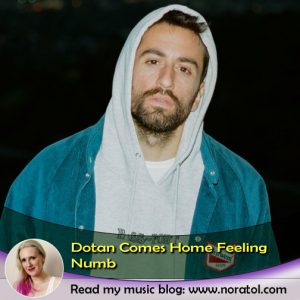 A Story By Dotan

A few years ago, I wrote about Dutch artist Dotan. He shared a story on social media that sparked my blog. A woman on a plane listened to his music, not realizing she was sitting right next to him. He shared the event, while it was happening. I caught it all on Twitter, where I’d just started following him.

It seemed the perfect complement. A musician’s dream. Getting recognition for his music only, not for his fame, but the story turned out to be fake. It all came from Dotan’s mind. This became the story that laid bare so much more than his imagination.

The cute little anecdote about his encounter showed some inconsistencies. Some people openly doubted it, causing a few journalists to dive in deeper. They analyzed his social media accounts and discovered Dotan and his team used over 140 fake social media accounts to boost his popularity. Using these fake accounts, they posted fake responses, build up hype with each airplay of his song and of course, liking a lot of posts and videos.

Though you may find this questionable, it’s not all that uncommon. Social media plays a great part in building a music career and attracting the attention of key players, who can help you further. Many artists or their teams, both upcoming and established, are tempted to ‘help’ things along this way. Everybody knows you can buy likes, but this was different.

A Little Too Fanatic

Even though the fake accounts might’ve shown normal, though overly excited, fan behavior that I myself have also spotted among fellow Madonna and Kylie fans – BTW real people – and how it also became apparel recently from the Swifties in the Taylor Swift vs Scooter Braun feud – these fake accounts went further. They were trolling other artists and fabricating sob stories that got Dotan press, and Dotan participated, as he did with the story I blogged about. And that mistake cost him.

The unraveling of Dotan’s social media marketing shook the music business and Dotan’s future seemed uncertain. Initially, the singer denied the claims against him, but quickly had to backtrack and admit his part in the promotional scheme. He named insecurity as the reason for doing it.

Initially, the reaction to his internet troll revelation puzzled me. After all, it’s not like Dotan didn’t have any real fans. This guy sold out a big venue and had international success. That can’t be built on fake social media accounts. Also, it’s not like the Milli Vanilli scandal, where the guys we saw never sang a note on their hits. Dotan provided real good music and created a sound that got copied since. However, his real audience was sucked in by an army of fake people. And the fake accounts participated in it all, even when Dotan had made it. Still, there once was a time when some artists bought their own music in order to make it to the charts and get noticed. And there is still such a thing as payola going on at radio stations. Is this just as bad? Or is it just more of the same old thing?

After the scandal broke, last year, Dotan left the country and hid away. In May, he released his first single since. It’s called “Numb”. The song doesn’t say anything about making mistakes or misjudging a situation. Even the insecurity, on which he blames his actions, is not mentioned.

“Numb” describes how he slipped into a depressive state and was left to feel nothing, after his secret was outed. If it wasn’t a good song, I would say it’s a weak angle to return upon, but funny enough Dotan really didn’t need to fake it ‘til he made it. His musical talent is good enough. He’s good enough.

I think he’ll find out he could’ve done it all on his own all this time.

Dotan heads out on a European tour in September. His real audience seems forgiving. Some dates have already sold out.

Keep up with Dotan on social media