Az Yet Steal Your Attention Again

Az Yet released a new single and it’s probably the best thing I’ve heard from them in a long time, but don’t expect what you may know Az Yet for.

Listen to Az Yet
Keep up with Az Yet 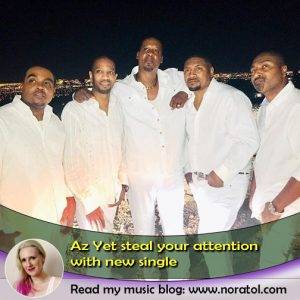 This week, Az Yet released their lead single “Kleptomaniac”. It’s the first single of a series of singles to come. A new chapter was on the horizon for a while. After the comeback in 2016 went sour, pretty much upon release of an album, the group had to reform, reshape and reinvent itself. Literally.

For most, Az Yet returned with three fresh faces, but some members have been in and out of the group for a while. Dion Allen and Kenny Terry are the only members of its original line-up. Claude Thomas and Dyshon Benson are former members who’ve returned and Parrice Smith joined the group in 2018. He’s the only new group member and to be honest, I have a suspicion he’s driving this comeback forward.

Reconnect To Az Yet

Now that’s out of the way, let’s talk about the new song. The group originally started working on “Kleptomaniac” in 2016. However, the track was never finished until now. It’s proven to be a good song to introduce the new Az Yet with.

Let The Past Go

I know that Az Yet’s original strength were the soothing and flexible vocal riffs of the likes of Shawn Rivera and Marc Nelson, enhanced by Babyface productions. Expect none of those. For fans that might be difficult, but let it go. “Kleptomaniac” is produced by award winning producer B. Slade. A far stretch from Babyface. In fact, the piano and synth bits remind me more of some of the things Darkchild does.

Stuck In The Groove

The song might not make that much of an impression in the beginning, but the surprise in the chorus is what makes the track. No, what you hear is not a problem in your streaming service. The needle of your vinyl isn’t hanging in the groove. It’s a risk the group took that works. At least for me. That moment of repeat is what makes it stand out and makes this track not so generic.

This line-up already proved they have their harmonies down, but they utilized the end of the song to showcase this once more. Altogether, I think ths song is a pretty good attempt and it makes me very curious about what’s ahead. From what I heard, Ne-Yo produced a few songs and the best is yet to come.

Listen to Az Yet

Keep Up With Az Yet