Zara Larsson All The Time

Little girls grow up so quickly. Zara Larsson has developed into a hot, fashionable singer who’s embraced the role of pop star fully and made it her own. She even steps it up a notch in new video in which she multiplies by 3.

Listen to Zara
Keep up with Zara Larsson 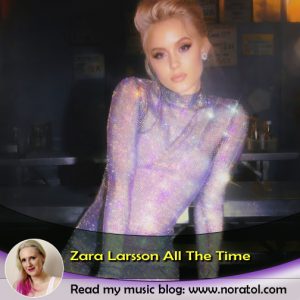 Zara Larsson in video for “All The Time”

It’s been years since I wrote about Zara Larsson. Her recent single, “All The Time”, gives me reason too. But to be honest, I’ve been sitting on it for a while. She’s released some really good songs lately, like “Ruin My Life”, “Don’t Worry Bout Me” and her collaboration with BTS, “A Brand New Day”. Sorry, I didn’t mean to ignore her. As you can tell, I kept up. Ha!

In my first blog about her break through hit, “Lush Life”, I know I was only partially excited. I saw potential, but I didn’t see it coming together then. Since, she’s shown so much progress as she matures. I love her blend of pop, r&b and electronic dance. Of course, this makes her a favorite among DJs and most of her songs often get the remix treatment. It’s something that makes her music reach even more people, because you can listen to her in the version you love the most.

Additionally, you can now even choose your favorite version of Zara’s personality. In the video for “All The Time”, she shows off different looks as three Zaras take the stage. However, I’m really about the music and the song is upbeat, electronic and robotic. It’s got that 80s synth-pop vibe that makes it come together with the objective of my blog; to write about music from or resembling the 80s, 90s and early this millennium. ?

The song is a co-write between Zara, Noonie Bao and Ilsey Juber, and is produced by Linus Wiklund (Lotus IV), who’s worked with Zedd, Avicii and Rita Ora. It’s the second release from her upcoming album.

Currently, you can catch Zara live in concert as she takes her “Don’t Worry Bout Me” Tour across Europe this summer. Most of its dates are in support of Ed Sheeran’s current tour. In September, she’ll perform in Las Vegas.

Keep up with Zara