R&B According To Jon B And Donell Jones

Jon B and Donell Jones are living proof the music always continues, no matter the career status. The two combined forces on a new song, released last week. They’ve prepared this collaboration to do good for r&b.

Listen to Jon B and Donell Jones
Follow Jon and Donell 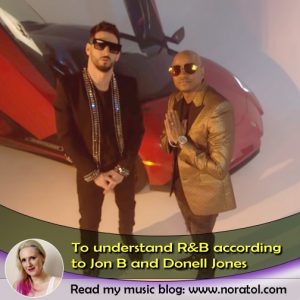 Jon B and Donell Jones in their music video

Among 90s r&b fans, this release is much anticipated. The two singers each made a lot of impact with songs in the past and the collaboration expected to bring that smooth r&b everyone loves from them. Their track, “Understand”, delivers.

Everybody knows Jon B from “Someone To Love” and “Pretty Girl”, and Donell Jones from “U Know What’s Up” and “Where I Wanna Be”. All classic r&b songs.

After their massive breakthroughs in the 90s, they went independent. This made them unable to reach the same big audience as before. For instance, Jon B was initially introduced as Babyface’s protege. Once on his own, he faced a different ball game.

Nevertheless, both men are songwriters and producers and that kept the ball rolling, despite the drop in fame. As true entrepreneurs, they discovered the power of collaboration.

Initially, last year’s Soul Train Awards brought them together, as they both performed to bring 90s flavor to the award show. Afterwards, the two were booked for r&b shows in the UK and they did a few interviews together. The idea of doing a collaboration came together in the middle of that and immediately drew attention once word got out. These are two veterans in r&b coming together with a similar sound, which could only get strengthened when they work together.

So, last week, the video for “Understand” was dropped. The song reminds me of Jon’s early work, but the song’s topic has matured since. Donell spoke out about that saying it’s a “much needed” change for woman to get more appreciation in r&b today. He states the tracks is “good” for r&b music as a whole. It most definitely appeals to people like me, who loved them in the 90s. It’s great to see a collaboration like this.

The song is part of Jon B’s new project. I suspect that he’s preparing to drop an album, because alongside of releasing this single, he’s also launching a sneakers collection. So, somethings happening there.

Listen To Jon B And Donell Jones

Keep up with Jon B and Donell Jones