In today’s state of the world, Dionne Warwick has a good point to release a brand new version of “What The World Needs Now”.

Listen to Dionne
Keep up with Dionne Warwick

I was very surprised to see her release a brand new video of her classic hit. Proving that musicians never retire, Dionne readies a new album called “She’s Back”. The first single is an updated version of her Burt Bacharach and Hal David collaboration, “What The World Needs Now”. In the video, she shows exactly why this song is still relevant today. With snippets of news, the lyrics still ring true today:

It’s all a great wish for the world and a greater reminder to any of us to be more kind and mindful to each other. 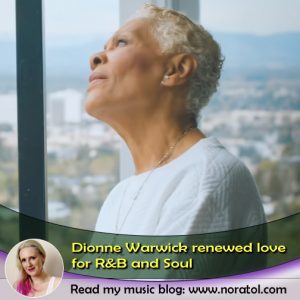 Dionne Warwick in her latest video

How do you update a perfectly good song? Fortunately, there are only some minor tweaks to it. It sounds a bit jazzier and she’s recorded her lead vocals, as I’ve heard her sing it live a couple of times before.

The updates are good enough to make the song different from the original, but stand on its own, too. It’s like she’s done a tribute to herself. Kind of like the tribute to family and memories, as she reminisces in the video (see below).

This week, a second track from the upcoming album was also released. It’s a duet with Musiq Soulchild, with whom she covers “Am I Dreaming”. Originally, this was a hit for Atlantic Starr (and in the 90s for Ol Skool featuring Xscape and Keith Sweat). Predictably, I just love it. Dionne’s version is true to that smooth 90s sound. What’s not to love?!

“She’s Back” is her 36th album. Wow – no wonder she’s honored with a Grammy Lifetime Achievement award, this year.

For her, it’s a full return to her R&B and soul roots. For the first time in 50 years.

The album is produced by her son Damon Elliot and features 10 new songs and 5 remakes or covers. Alongside Musiq Soulchild, the album also includes collaborations with Kenny Lattimore (“What Color Is Love”) and Krayzie Bone from Bone Thugs N Harmony (“Deja Vu”). Furthermore, a special edition of the album also includes her greatest hits remastered.

Currently, you can see her do her residency in Las Vegas (at Bally’s Jubilee Theater) until the end of this month. She shows no signs of slowing down. What a great example.

Keep up with Dionne Warwick