There’s so much happening with music right now. It’s been hard to decide who I’d write about this week, but Ariana Grande is all about momentum, so the girl deserves a blog. Man, did she turn Coachella to her hand!

Listen to Ariana Grande
Keep up with Ariane 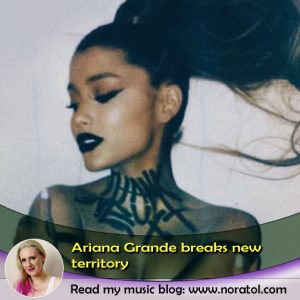 If you’re expecting me to say anything different about Ariana Grande, after Coachella, than many other bloggers, I will probably not meet your expectations. For many years, this girl has puzzled me. You can tell in my previous blogs about her. It’s the mix between her girly, angelic looks and the dirty lyrics that made me distrustful. However, I could never deny that voice and talent.

Nowadays, I think she’s a pretty good role model for young girls. To see her bounce back from a break up with “Thank U, Next” shows maturity. I’m talking about both the single and the album. The self reflection is one thing, but the respect she shows to her exes got me to respect her much more than before. For once, someone’s not throwing shade or anything. She’s showing respect and understanding, even if it doesn’t necessarily work in her favor… well besides, creating beautiful songs because of it.

I also realize that she’s a hell of a songwriter and vocal arranger. This girl just had a lot more in her than I gave her credit for.

Finally, she’s got super powers, haha! I don’t know how often I’ve seen reports about N Sync coming back together for something. However, I don’t recall they ever did. But during Ariana’s set at Coachella, she managed to do it. She was joined by N Sync. And it looks like Justin Timberlake was only missing because he just wrapped up his own tour and couldn’t be involved with this performance. It’s great to see the memory of N Sync being celebrated so positively, after Lance’s documentary explained such a negative side to the group’s story.

But back to Ariana, who rocked Coachella and proved to anyone there and looking in online, like me, that she’s a great live entertainer who banks on her years of experience. Usually, artists reach this much later in life. You can see that seasoned artists are completely comfortable within their capabilities. Ariana knows what she can and can’t do, she knows what kind of artist she is and she’s big enough to take control over it all. That confidence shows as she looked completely in her element while turning Coachella into Arichella…. and me into a fan after all.

Keep up with Ariana