Today, 15 years ago, a song was released that took the world by storm. It’s not a serious classic, but one that took tongue and cheek to the masses. Yep, on July 15th 1991, “I’m Too Sexy” by Right Said Fred was released.

Not to anyone’s surprise, the song itself started as a joke. Brothers Richard and Fred (Fairbass) had encountered a lot of narcissism as managers at a dance studio. Together with guitarist Rob Manzoli they were musicians by night. During their first writing session with Rob they were looping a beat on the computer when Fred pretended to be a poser, took off his shirt and sang the magic words “I’m Too Sexy For My Shirt”. In this hilarious moment, the idea for the song was born.

The song became a massive hit, certified for selling over 1.5 million singles world wide, but when conceived couldn’t interest any record label. Music promoter Guy Holmes started his own album to get the song to us. The original rock version got dropped for a dance version, even though the original rock influence can still be found: The guitar riff comes from Jimi Hendrix song “Third Stone From The Sun”. 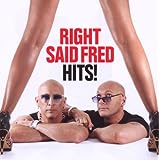 “I’m Too Sexy” went on to reach number one in 18 countries, including the US. However, in homeland UK, Bryan Adams kept them from the top position with his classic “Everything I Do”. The album “Up”, containing the sexy song, even went on to sell 7 million copies.

Right Said Fred continued to create dance music in combination with humor. Even though Rob left the band along the way, the brothers Fairbass are still around to this day. In Europe “I’m Too Sexy” was the start of a string of hits, but in the US they were one hit wonders for the main stream charts, even though they have stormed the US dance charts in recent years.

Over the years the group has performed the song in many versions, including this accoustic version: