It’s been a while since my last blog about Shawn Rivera (former Az Yet member). Recently, he surprised everyone with a new release, “Moving On”, which oozes positivity.

Listen to Shawn
Keep up with Shawn Rivera 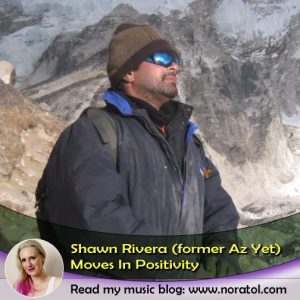 Shawn is one of the most open and positive people that I’ve met. He’s got a great spirit and good attitude towards life. However, he works at it, like we all should. Life already threw him enough punches to roll with, but Shawn also looked for a challenge, when he went hiking up the Mount Everest, last year. A trip his wife, Jaclyn Victor, gifted him.

With recent reports about deaths of tourists at the mountain, he shared a new song to encourage others to make the journey. However, the song is about more than that. “Moving On” encourages people to have faith and keep moving on under any kind of circumstances. It’s not the first song Shawn’s released that contain a deeper meaning.

Last year, Shawn released a cover of Sting’s “Fragile” to raise money for Puerto Rico. Later, he released the highly auto-tuned “One Destiny”. A song about the state of the world in which he raises some really good points.

“Moving On” also contains some auto-tuned parts, but the catchy song more clearly contains influences of world music, perhaps from the Nepal locals. I’m sure Shawn was open to get exposed to the local music, while being on his life changing trek. The video for the song is a compilation of footage shot on his trip, and it sure looks like it was a once in a lifetime experience.

Keep up with Shawn Rivera