Be Nice To The Black Eyed Peas and Snoop Dogg

The Black Eyed Peas and Snoop Dogg come together to inspire kindness. However, there’s no need pretending to be nice about the song. It really is one of my favorite tracks right now. 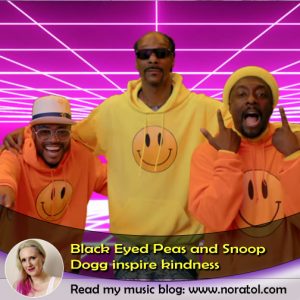 Isn’t time an interesting thing? For a minute, let’s imagine it’s the early 90s, and a partial gangster rapper wears a happy face on a hoodie to convince you to be nice. If you’re from that generation, you’ll know that wouldn’t work. But now, just turn on the video for “Be Nice”. It’s happening. It can happen. No one, back then, could think it possible, but these are different times.

However, in these times of internet trolls and people filming accidents rather than helping the people involved, it’s very necessary to remind people to be nice. I support anyone who wants to spread the message. The Black Eyed Peas have always pushed a positive vibe, but it’s mostly been in the way they tried to get you to think about something. With this song, you can’t miss what they tried to do. And it works. At least on me.

The throbbing bass and clear lyrics make this song a joy to listen to. As I understand it, the song came from Songland. A show that shares the songwriting process and lets songwriters compete each other. Will.I.Am came in looking for collaborators for the new Black Eyed Peas album and this is one of its results.

Will.I.Am himself is already viewed as one of the influential songwriters of our time. I think the groove of this song makes him move into Pharell’s territory. This would so fit his profile and extend that “Happy” vibe. The colorful fun video enhances the message, so the next time you need some motivation: “Be different, be kind”.

Listen to The Black Eyed Peas

Keep up with the Black Eyed Peas