If I’d put a playlist together with songs about perseverance and keeping that fighter’s mentality, I’d end it with “Before I Go” by Guy Sebastian. It describes standing at your breaking point about to admit defeat.

Listen to Guy
Keep up with Guy Sebastian 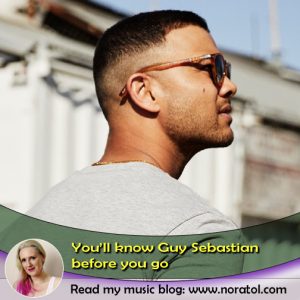 Guy Sebastian Is His Name

The song’s been out for quite some time. Currently, it’s in a-rotation on the radio stations in my area and therefore, I’ve heard it lots, lately. I got curious about the song and its singer.

“Before I Go” is a power ballad that’s completely fitted to today’s pop song requirements. It’s got a little bit of that gospel-soul feel, while still staying true to today’s pop sound. It reminds me of something Rag N’Bone Man would sing, and I expected to research a singer in the singer-songwriter genre. Instead, I found Guy Sebastian. Looking into his career, I feel this song stands out from the rest of them and then again, fits in perfectly.

There’s no denying that Guy knows how to write hit songs. All his self written songs are super commercial and, as stated before, this song checks all the boxes. So, maybe he’s just progressing with the current trends. However, all the other songs I heard are mostly dance-pop songs even though his vocal delivery houses a lot of soul.

His use of the low regions of his voice make “Before I Go” sound really deep (hence, my connection to Rag ‘n Bone man). The use of background vocals strengthens the song’s soulful touch and its power.

In the car, I wondered what the song meant. Only really hearing a portion of the lyrics, I wasn’t sure if he was about to give something up or whether he found renewed power to fight. Funny enough, I think the lyrics still leave that open to interpretation, because I’m still not fully sure.

Guy has come full circle. I must have seen his performance at the Eurovision Song Contest in 2015, but for me that’s just a show I watch. I don’t keep up with all of its performers. The rest of his career has completely passed me by. But it’s quite impressive when someone builds a long lasting career like his after a talent show and then becoming a judge himself on another talent show. Guy, originally Malaysian, is now living in Australia where he judges on The Voice.

I quickly ran into dirt about him too. It didn’t take too long before finding out he is not that punctual, reportedly, and he’s currently into a bit of a fight himself with a former manager. They are slapping each other with court cases. So, maybe the song is very personal. Nevertheless, it’s the first song to really make waves internationally, so I’m sure we’ll hear more songs like this one.

Keep up with Guy