Louise Stretches Back To Pop Music

After exploring other creative outlets, Louise returns to pop music. She makes it look like she was never gone. Her new video shows an artist coming to her own, who combines all life lessons and celebrates her new found freedom.

Listen to Louise
Keep up with Louise 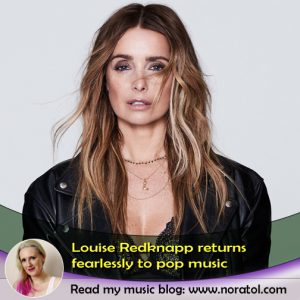 Louise is owning it

Usually, when I talk about an artist growth spurt, I mean a professional or artistic one. However, this time I see something different. Louise just released the video for her single, “Stretch”, and for the first time ever, I see a very confident woman in her.

Two years ago, Louise went on her first solo tour in years. It seemed her return to music, but a lot of other things happened instead. Since, she’s divorced and she’s endeavored on many artistic adventures.

Yes, the once so sweet pop singer performed in lingerie as part of the musical “Cabaret” with Will Young. Despite her modeling lingerie before, it’s something else to crawl into a character so far removed from you. Once you overcome your barriers, you become fearless. The theater experience and, reportedly, some of the cast, sparked a desire to get more out of life. Take that and blend it with newly gained expert dance skills on Strictly Come Dancing, and you get Louise finding her groove back. Voila!

In October, her new album, “Heavy Love”, is expected. Leading her way to the release, she’s sharing singles. Recently, “Stretch” was the first one to get dropped.

The sexy song sounds like a follow up of “Naked”, a song she’s released ages ago. Back then, it seemed like a weird match to her. As a solo artists, I felt she was still finding her way then. However, today, she’s really owning it in “Stretch”.

I think she turned to Kylie Minogue for inspiration. The video looks a bit like Kylie’s “Sexercize” (though slightly cleaner!). Musically, “Stretch” reminds me of “Slow” by use of vocals, as well as Will Smith’s “Switch” (I don’t know why, don’t ask) and a bit of Prince mixed into it. I like it and it makes me wonder what else is to come.

Alongside kicking off her music career, she also plays in Dolly Parton’s “9 To 5”, the musical, until June 29th. Then it’s music full time for her. After the album release, she’ll take it on a UK tour in March 2020.

Keep up with Louise