Janet Jackson Shows She’s Made To Last, Once Again!

There’s a reason why Janet Jackson believes we live in a rhythm nation. Once again, Janet shows she’s got the rhythm (and the moves) like no other in a new single and video, “Made For Now”, featuring Daddy Yankee. 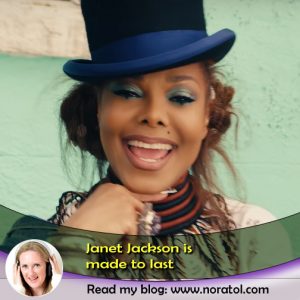 Janet Jackson in the “Made For Now” video

Success After A Personal Break

At the time of writing this, the video for the song reached over 20 million views. It’s her most viewed video on YouTube and marks her undisputed return. Janet resumed touring, a year ago, after giving birth to a boy and getting divorced, pretty quickly after. Her return to the stage was reported in many publications, but no heavy promotion was done for her tour.

Instead, her new song, “Made For You”, and the collaboration with Daddy Yankee, got a massive launch. They threw a release party for it, a street party in Harlem and made a very colorful, fun video directed by Dave Meyers.

Janet Jackson Is In The Now

The reggaeton “Made For Now” is more rhythmic than most of her other songs. It shows Janet is still not done growing and exploring. Yet again, the song is more evidence of the versatility of her voice on music. Whether it’s pop, r&b, rock or reggaeton, it comes together, effortlessly.

Despite reggaeton / afrobeats not being my favorite genre of music, I have to admit I haven’t been this enthusiastic about Janet’s music and artistry since the albums “Janet” and “Velvet Rope”. It’s something to do with her look as well. Maybe it’s a case of celebrating her freedom (the way she also did in her “Control”-era), but at age 52, she’s looking more fashionable than ever!

Her look remains edgy, mixed with a bit of a romantic look, but is now super colorful. In the video, she’s combining some African inspired pieces (and prints) with bold outfits most fashionistas would die for. 50 is the new 30, or so it looks!