Today, a new Gabrielle album is released. “Under My Skin” is her 6th studio album, but it’s her first in a whopping 11 years! It’s also her first album on the BMG label.

Find A Way to Rise 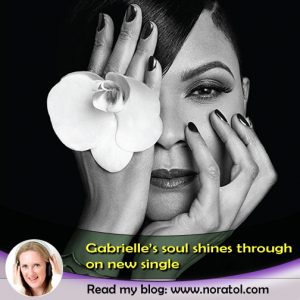 Her absence from the UK music scene had to be broken, sooner or later. Gabrielle is a real asset and her name always pops up when you talk about soul and R&B music from the UK.

In order to do her comeback right, she’s worked with Grammy nominated songwriter Steve Chrisanthou (known for “Put Your Records On” by Corinne Bailey Rae). Together, they worked on 4 tracks for the album, including the first single “Show Me”.

“Show Me” brings back that classic melodic soul music. It’s a strong reminder of her music from 2001, when she released her album “Rise” featuring the hit “Out Of Reach”. Her voice is so well suited for this kind of production. Believe me, you wouldn’t have heard me say that, 25 years ago, when “Dreams” was released. I love that song now, but thought her voice sounded so nasal then. I got used to it and have fallen for many of her songs since – Immediately upon hearing them.

It’s happened again now. “Shine” is the second single from “Under My Skin” and I fell for it hard.

A Touch Of House

Gabrielle wrote the song in collaboration with Swedish songwriters Tobias Lundgren and Tim Larsson. On it, her soul music is combined with that whistle from tropical house music. It’s just easy to get into with that catchy repetition in the chorus. I love it and think she’s on her way back to success if this continues throughout the new album. So, there’s the familiar Gabrielle-sound with enough of the new to keep it exciting. And yes, she still covers one of her eyes, so even her look is familiar! Therefore, I spot all the right ingredients for a great comeback.

The attention she receives is growing with each single, at the moment. While she’s touring the UK to promote the album, you may want to catch her somewhere. Check her tour dates on her official website.