Home » Music blogs » Danny Wood and his side project from NKOTB

Danny Wood and his side project from NKOTB

NKOTB, 10 Years Into Their Comeback

I grew with the New Kids On The Block, which already sparked another in blog I wrote. They were a whirl wind pop sensation that was too big to ignore. You either loved or hated them, but you couldn’t avoid them. NKOTB were all around. The group had comic books, bubble gum, hot lines to call, and whatever else you could think of. As a fan, I hated them for it, because I had to make daily tough decisions on what to buy and what I really couldn’t afford.

But, all kidding aside. Their commercial success is no joke. Over 10 years ago, ‘The Block’ made a successful comeback which is still ongoing. I think everyone seems to be so much happier and appreciative this time around.

Throwback To Other Times

The fact that their return lasted this long demands respect. Back then, I remember, Danny Wood and Donnie Wahlberg wanted to enter the hip hop scene. But, no matter how much they wanted to, no one wanted to be seen with them. But now, years later, Salt N Pepa and Naughty By Nature join their upcoming Mix Tape Tour (with Debbie Gibson and Tiffany). They’re also on “80s Baby”, a new track to promote the tour. Somehow, that would’ve never happened back in the 90s.

Apparently, that non acceptance in hip hop – and stories like being manufactured – left open wounds, as this throwback post by Donnie reveals:

#TBT to THIS! 1985 in the Joseph Lee School in Dorchester! About to perform as #Nynuk — before we changed our name to @nkotb! The show was in front of about 80 teenagers in summer camp. PS — Those fake ass stories of “thousands of kids that auditioned for this manufactured band” are such bullshit! I’ll give you facts! A total of 7 kids auditioned! Not thousands. Why? Because that’s how many kids (not named New Edition) were doing this type of shit in Boston back in ‘84 — when I met Maurice Starr and became the founding member of this band. Four others are all my friends, and are the guys pictured here — @nkotb to this day. The other two were @markwahlberg (who quit to become Marky Mark) and my friend Jamie (who quit, just because). We came up from the gutter! From nothing. From food stamps. There was no “corporate machine” behind us. There was only gov’t cheese inside us. @mauricestarrthegeneral and Mary Alford discovered, and believed in, me. They soon believed in five kids who became the New Kids! Five kids who worshiped #NewEdition, The #Stylistics and LOVED #HipHop! That’s the story. ???? (we couldn’t even afford to put the name of the damn group on Joeys sweatshirt). ?? 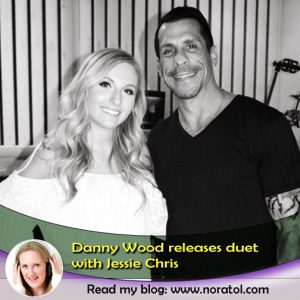 I love how social media can show you the personal side of these stories.

Anyway, while NKOTB are reminiscing at the moment, Danny releases music of his own. His duet “Bodyguard” came out, last week, a duet with upcoming country singer Jessie Chris.

Personally, I think Danny’s voice sounds a bit strained and thin. As a result, he’s not easy to listen to sometimes. It’s quite a challenge getting it to work on pop songs. So, his music needs a few plays for me to get used to. Nevertheless, Danny released solo albums more frequently than any other New Kid-member. Mostly, he draws inspiration from rock, pop, sometimes even blues music. The rough edges in his vocal work better combined with a guitar. Also, in comparison to NKOTB, his lyrics are much deeper. I can imagine why he’s so productive. He expresses himself through his work.

Danny is also the New Kid-member struggling the most for commercial solo success. I’m not sure if the track “Bodyguard” changes that, despite the song being the most commercial that I’ve heard from him in a while. I found myself still singing it the next day.

Danny wrote the track and, just like in many of his solo songs, there are personal references in the song. For instance, he mentions his mother’s passing, which is not uncommon for him to speak on – He lost his mother to breast cancer and started a foundation raising money for patients and survivors.

For Jessie, “Bodyguard” is her fourth single. Jessie was named an artist to look out for, last year by Billboard. It’s her mission to stop bullying at school. She toured high schools with her song “Rome” on an anti-bullying campaign (listen below). This caught Danny’s attention, whom approached her with the song “Bodyguard”, which is all about the protection you feel when you feel loved or supported by friendship. It makes her mission come full circle, too.

Keep up with Danny