Next year, “Don’t Take It Personal” by Monica will turn 25. I hope she’s working her way back to a new high in her career, starting with her new single “Commitment”.

Listen To Monica
Keep Up With Monica 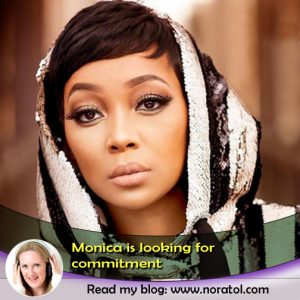 It’s been a long time since I last blogged about Monica (at that time for Kurrent Music). She’s one of those singers I love listening to, when I see her name in the new releases list. Her songs rarely disappoint. So, “Commitment” caught my eye upon release, a few weeks ago. Over the years, her singing got even better and her voice got stronger, deeper and fuller. She works it with ease.

Her upcoming album, “Chapter 38”, adopts Adele’s reference to life years in album titles. While Monica is currently 38, life allegedly has thrown her a loop. Rumors are that her marriage of 8 years is on the rocks, which could explain why “Commitment” is the first single. In the lyrics, it’s clear what Monica is looking for in a relationship. A great way to introduce yourself back onto the dating scene and a topic that a lot of women, around the world, will relate to.

Monica has always come across to me as someone serious and super confident. The song definitely strengthens that impression, but there’s more. Fashion has always been of importance to her career and she has always had her own style. Now, entering this chapter, I think she stepped it up a bit more. Her outfits are more edgier than ever and, for a change within her musical peers, her current fashion style is not necessarily about taking clothes off. She’s embraced the return of the over-sized long jackets and she knows how to work them.

So, new music, an updated look and rumored possible major personal changes. You would think that’s enough change right? Nope! The singer has also taken a plunge with her music. No, not the music of her song – “Commitment” is a contemporary r&b song, the way you would expect from her – but she has gone independent with her music. The single is the first song released through her own label, Mondeenise Music. A release date for her new album has not yet been announced.

Keep Up With Monica