Color Me Badd, a group in badd times 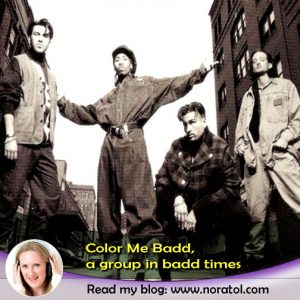 Color Me Badd in its original line-up

Color Me Badd with double D

“We’re Color Me Badd. Badd with double D, so it’s a positive. We’re really good.”  I remember one of the band members explaining themselves that way on a pop show in the 90s. Their debut single, “I Wanna Sex You Up“, had just hit global success, causing quite a stir. Color Me Badd became a household name.

The name Color Me Badd probably popped up in many households again, in the last week or so. A simple performance turned into a TMZ headline.

Color Me Badd are clearly in a bad place. Notice the single D, for it’s negative.

Bryan Abrams left the stage, at the beginning of a show. Then, returned at the end only to push Mark Calderon down. Bryan got arrested. The police states alcohol was the cause of the on-stage outburst. Mark didn’t press any charges, causing the police to release Bryan after holding him for an hour. Less than a week later, the two were on-stage again, together, with the whole world knowing the trouble band are in.

Member Bryan Abrams has been struggling with alcohol abuse for a long time. The alcoholism even caused him to be thrown out of the group, when most original members had just rejoined to start a reunion, in 2010.

Of course, like many other groups, Color Me Badd has had a few line-up changes throughout the years.

For me, the Color Me Badd story lasted from 1991 to 1998. After the failing of the album “Awakening”, there were a few departures in the group. Members Kevin Thornton left for a complete life change and Sam Watters went on to be a successful producer and music exec. This is where I moved on to other groups.

But in round two, Bryan was replaced by Martin Kemper and Adam Emil replacing Kevin, who’d  briefly returned.

All the line-up changes already shows there’s some trouble in the band.

It Got Everybody Talking

During the recent events, my Facebook timeline blew up with various lengthy discussions about the group. Fans, peers and ex-girlfriends of Color Me Badd members had a lot to say.

Mark Calderon took to TMZ to express his concerns and views on the matter, already indicating that he wasn’t really planning on pressing charges to make the remaining tour dates happen.

In the timespan of a couple of days, I’ve received more information about the band than I’ve ever heard before. The story became even more clearer after former band member, Kevin Thornton, also posted a video response (since deleted). In his video, he describes a timeline of most issues the band was running into, and how he feels the current people involved are enabling Bryan to continue his drinking habits.

Clearly, the group is overshadowed by a lot of accumulated drama, which leaves it clear there’s no chance the original 90s line-up will ever get back together. However, all of the people involved do seem to want Bryan to get help, but agree that he might not have hit his rock bottom yet.

It’s been enlightening to hear why one of my favorite 90s group actually broke up back then, but as a fan, it’s been hard catching up on everything that has happened since. Nothing ever is what it looks like and Color Me Badd’s story is no different. That slick 90s group is no more. Instead the first video footage of the performance after this incident contained a weird vibe. Mark and Bryan look stuck together and can’t look each other in the eye. So, it’s better to look back in this case and watch the old videos instead. It’s sad. Notice the single D again.

Listen To Color Me Badd