The reviews of Wildlands Adventure Zoo in Emmen, The Netherlands have been mixed from the moment the zoo opened its doors. My time there was well spend though. 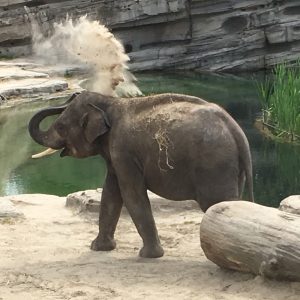 Wildlands opened its doors in 2016. Before then, the zoo in Emmen had two locations around the town’s center. It was always odd to cross the shopping center to go to part two of the zoo. So, a new zoo was created with a completely new concept which combines a zoo with rides from adventure parks.

The new park is divided in three sections, each with their own theme and one or two rides. The rides are a boat trip, a safari, a roller coaster, simulator 4D film and an elevator that takes you back in time. Speaking of time, don’t be fooled by Google’s report that the average time spent in the park is 1.5 hours max. You definitely spend more time there. Though it helps if you love animals and/or have young kids. Duh! 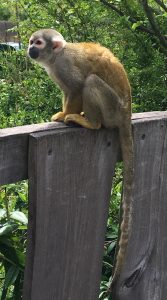 Close To The Wildlife

There’s lots to see in various setups. Before you know it, you’re surrounded by monkeys or walking among butterflies or bats. It doesn’t matter what the weather’s like. There’s always something to do inside as well. But, mostly, you are extremely close to a lot of the animals. In some cases, you literally walk through their habitat and are close enough to touch, if you want to risk it.

Most animals have pretty big habitats and most look pretty happy in them. They are very lively and keep themselves entertained. I think the only one not so well off is the tarantula, who’ll keep you company while waiting in line for the tour by boat. Don’t worry, it is enclosed and is an interesting surprise while you wait. Though I didn’t experience any long lines of people waiting, luckily. 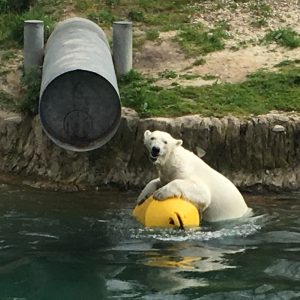 A polar bear at play

A Combination Of Adventure and Education

For those who pay attention, there’s a lot to see. Animals are surrounded by plantation from their original surroundings. But it’s the combination of the adventure elements that make this a real experience. If you’re done taking the regular paths, you can take the adventurous route. This involves a little bit of climbing or walking on bridges made from ropes. And all paths lead to something specific to see, which you’ll miss otherwise.

It took me a full day to see it all and do all the rides. A day I can recommend for your next family day.