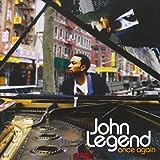 There’s nothing like ending the day with a good glass of wine and some good music to listen to. John Legend, so far, has only provided us with the latter, but he recently teamed up with fellow wine lover Jean-Charles Boisset to branch out into wine making.

The two created LVE, Legend Vineyard Exclusive. At the moment, they have launched with two wines, a 2013 Cabernet Sauvignon and a 2014 Chardonnay.

According the LVE website, the 2013 Cabernet Sauvignon combines grapes from three vineyards in St Helena, Yountville and Raymond Vineyards’ Rutherford Estate. It’s got aromas of dark fruit and cocoa, and flavors of blackberry, black licorice, oak, spices and chocolate.

It’s possible to taste the wines at Raymond Vineyards.

The idea of the collaboration evolved after John Legend performed a surprise charity performance last year at the Auction Napa Valley. It helped raise $850,000 for local charities. For Boisset, it’s not the first time he’s teamed up with a celebrity. He previously also launched a wine collection with Dan Aykroyd.

John Legend clearly is someone who enjoys elegance and fine living, which is also visible in the pictures of his New York apartment’s listing. It’s up for sale, amongst some other celebrity pads.

He is also keeping busy as an executive producer for the TV Show Underground and recently received an award for his philanthropy efforts.