Home » Music blogs » When PJ Morton and JoJo Say So

When PJ Morton and JoJo Say So

R&B singer-songwriter PJ Morton enlists the help of JoJo for his new single “Say So”. This beautiful song is one of my favorite new releases, at the moment, because when PJ and JoJo say so, you must listen. 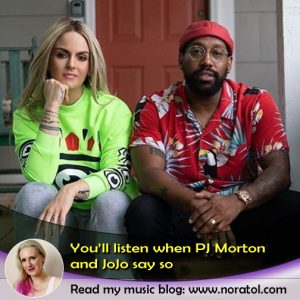 PJ Morton and JoJo on their video shoot

This song was actually released on Valentine’s Day, this year, but got back on the radar, when a video for the song was dropped, last week.

Of course, I’m already fascinated by JoJo’s career, who’s had so many setbacks. She literally had to sit back and see other young female singers get the life and career she seemed destined for. Despite her big following, I still feel like she’s a bit underground. The underdog. So new music from her always interests me and I always hope it pushes her into the big time.

A few years ago, PJ Morton was a bit surprise, when I saw him live supporting his former band, Maroon 5. It’s sort of where he first began. He made an everlasting impression and, in the meantime, he’s now even become a record label owner.

When you put the two of them together, you get spectacular vocals and some high level quality of music. “Say So” meets that expectation. Their two voices blend well together. Both throw a lot of riffs in their vocal melodies. Usually, one supports the other.

The two don’t always start singing on the same timing. That off sync singing is what gives this song a special touch.

Piano In The Lead

Musically, it helps that I have a weak for the piano, which has a leading role. The ballad builds up with additional instruments, along the way. In the end, it meets a full production with a great beat to it. The song is perfect for 90s r&b music fans, like me.

PJ Morton is currently on tour in the US, so you can catch him live.

JoJo released another duet. This time with multi instrumentalist Jacob Collier. It’s a testimony to her skill set as a singer. She’s operated in the pop and r&b genres, for a long time. However, now, she’s tried a little bit of a jazz influence on for size with Jacob. Probably not everyone’s cup of tea, but the track is infectious. It even reminds me of Prince with all the great harmonies. I’ll post it below for you to have a listen.

Listen to PJ Morton and JoJo

Keep up with PJ and JoJo