Dutch soul singer  Steffen Morrison released his latest single, “Positivity”. It sounds like it could’ve been released in another era, because Steffen is not about updating that classic soul. He’s about sharing it.

Listen to Steffen
Keep up with Steffen Morrison 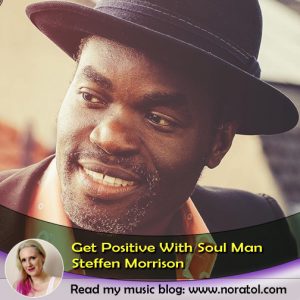 Steffen has been on the verge of a breakthrough for some time. I first heard of him, many years ago, when my vocal instructor started singing background vocals for him. She already told me, he’s got something different. Since, he’s built up quite a following of peers and fans of classic soul music. Yet, even a participation on The Voice, a few years ago, couldn’t force a major break through.

I have to be honest; His new single will not do it for him either. However, that’s not because I can fault the song. It’s great and I love it (otherwise I wouldn’t write about it)! Real soul music is not part of today’s mainstream music. So, “Positivity” is a classic, even though it’s just released.

For those unfamiliar with Steffen, it’s a great introduction to the self proclaimed soul man. The song draws influences from the 70s and 80s. Think in the lines of Stevie Wonder, Sly and The Family Stone and Michael McDonald (in the 80s). And this is exactly the kind of soul that Steffen is known for.

Movin On To Something New

“Positivity” is the first brand new track and opens a new chapter after his album release, “Movin’ On”, last year. However, it still continues his collaboration with producer Tjeerd Oosterhuis, who’s also known for soulish influences in his pop songs. Currently, the song has just been released for Belgium, The Netherlands and Luxembourg, but a global release is scheduled. Nevertheless, you can listen to it on YouTube. Yeah!

Keep up with Steffen Morrison