Friends and family of Avicii finished the music he was working on, before he died. The first single released posthumously is “SOS”. Musically, it’s an ode to Avicii’s legacy and comes very close to what he would’ve done. 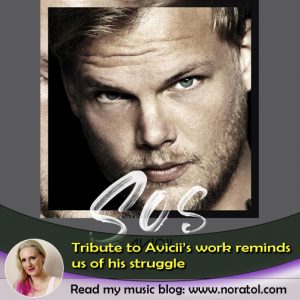 Avicii’s “SOS” reminds us of his troubled mind

There’s something about hearing “Can you hear me/SOS/Can you help me put my mind to rest” that gives me an eerie feeling. It’s in the knowing what I know now. The realization what Avicii was going through when he wrote it.

The documentary about him comes to mind, featuring his struggle with life as a pop star. The tragedy about his story is that he tried to find help, but couldn’t find it in time to save him. He committed suicide while on holiday. Around the same time, he was working on this song. His desperation is in it.

It makes it a weird re-connection. One on hand, I’m glad to hear new music and on the other, it’s confronting to be reminded of his troubled mind. Of course, Avicii always put a lot of himself in the music. In fact, I’ve never seen a DJ be so candid in everything. Instead of protecting a party boy image and keeping up a facade that life is great, he was brave enough to show what it was really like. He shared his full story and that in itself has the power to change things for others.

However, “SOS” could be about anything you make it: A love song, a battle with drugs, a battle with life. Avicii had a way of making his songs personal, but also wide open for any other interpretation. This made him so relatable and appealing to us. This release is a great tribute to that.

Altogether, the team put a lot of effort in keeping Avicii’s original intentions. Even his original MIDI recordings were used, as the producers explain on Avicii’s YouTube channel (see below). Aloe Blacc provides vocals. It makes the song instantly recognizable as an Avicii song.

The posthumous album, “Tim”, is set for release in June. On April 20th 2019, it’ll be a year since Avicii died. All proceeds go to the foundation his parents set up in his honor. Initially, it’ll focus on mental health awareness and suicide prevention. However, other topics that were important to Avicii in life, are also on the foundation’s wish list to focus on.