Today, exactly a year ago, hurricane Maria made landfall in Puerto Rico; one of the most violent storms to have hit the area. Singer and songwriter, Shawn Rivera, has Puerto Rican roots and feels for the people living there. Therefore, the former Az Yet member releases a charity song. He aims to raise money for individual Puerto Ricans rebuilding their homes and lives in the aftermath of the storm. 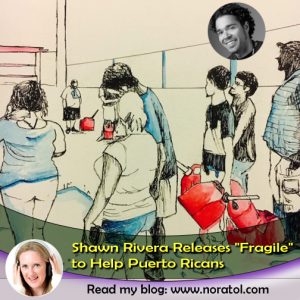 In A Very Fragile Position

Shawn writes in his video description that “many of the ‘non-tourist’ areas remain unvisited and unfixed by the US government which claims them as ‘citizens.’” Areas are still without water or power. The political situation isn’t helping anyone, leaving the country in an even more fragile situation than  necessary.

It’s one of the reasons why Shawn probably chose to record Sting’s classic hit song “Fragile” – not just to highlight our own frailty as the human race trying to hold up against natural disasters, but also to highlight the power struggles amongst ourselves.

And Then There Was Trump Tweeting

Shawn: “Upon hearing the news of the devastating impact of Hurricane Maria, I was immediately compelled to do something. But it wasn’t until I heard controversial remarks by Donald Trump (basically implying that Puerto Ricans should be doing more to help themselves), that I decided to follow through.  After being initially enraged by his dogwhistle racist stereotype of lazy ‘Ricans, I realized I couldn’t agree more with the meat of his statement – We can and should do more to help each other!”

Help Others Wherever You Can

At least Trump’s insensitive tweets were good for something, I guess. They triggered reactions and redirected the attention back to the country’s current situation.

Though I never think one should feel obliged to make up for someone else’s stupidity, I support Shawn in his attempt to improve the lives of others with the use of his music. Pitch in too and buy “Fragile” on iTunes.