Sabrina Carpenter Must Not See Her Bed At All

As diverse as her acting roles may be, so is Sabrina Carpenter as a singer. Her latest song, “In My Bed”, is a great bop, but this girl’s got more tricks up her sleeve.

Listen to Sabrina Carpenter
Keep up with Sabrina 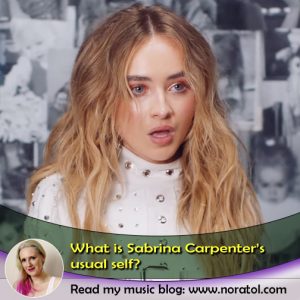 Sabrina Carpenter in “In My Bed” video

Sabrina Carpenter Is On A Roll

So, let me just start by saying that I’m older than the generation that watched “Girl Meets World”. Also, I’m one of the few in the world to not have Netflix. Nevertheless, Sabrina Carpenter seeped through to me via “In My Bed”. I just love that song and have been catching up with her music, ever since. And there a lot of songs to discover. I can’t believe she’s only 20 years old.

Vocally, I’m well impressed by her. In particular, I love the fact that she doesn’t seem to stick to one particular sound. She sounds so much older than her age and somewhat reminds me of a simplified Ariana Grande.

It’s funny how the song “In My Bed” is actually about her not being her usual self. Musically, I wonder what her usual self actually is. She’s one of the pop singers who bounces from genre to genre and fits in with everything.

Sabrina just drops one song after another. Sometimes by doing features. I think that “In My Bed” is officially still the latest single, but in the meantime she’s already dropped the audio for another bop, “I’m Faking”.

“In My Bed” is a hit potentional electro pop song with a surprisingly catchy hook as a chorus that grabs your attention and gets stuck in your head. As up beat as the song sound, the topic of the song is actually slightly depressing.

Despite her constant flow of music releases and a new album release today (!), Sabrina must take a break from music soon, because she’s starring and producing an adaption the novel “The Distance From Me To You”. There’s no chance she’ll see her bed any time soon.

Keep Up With Sabrina