Remember Ruff Endz from their huge 90s hit “No More”? The duo’s catchy track told women off and explained their line of credit was pulled. Well, these guys are now singing a different tune on their current single “Virtuous Woman”.

Listen to Ruff Endz
Keep up with Ruff Endz 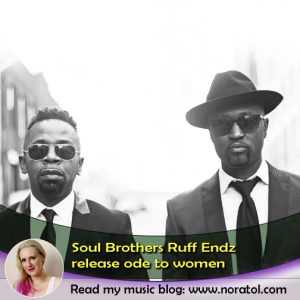 From what I understand, Ruff Endz are Baltimore legends. Their success in the States was much greater than out here in Europe (as the story goes for many 90s r&b acts). In fact, I probably only remember them, because I loved “No More” so much, I bought the single (and who buys any music nowadays, right?!). For me, it was quite a surprise to find new music from the group, as I hadn’t heard anything from them since.

The latest releases got me curious about the past and as it turns out, I missed quite a bit. Even though the duo show a hiatus of a decade, it didn’t take me long to find traces of an earlier attempted comeback. In 2016, the two got back together to release a song in response to the uproar happening in the States. The socially conscious “Time 4 Change” was supposed to bring them together for a one time only. However, it lead to plans for a reunion, which never happened….then.

Nevertheless, the song also introduced the world to a matured Ruff Endz. Aware of the world around them, the duo returned at the end of 2018. Both members never stopped making music, after the group’s last official release in 2010. So, the 2018 album, “Soul Brothers”, shows creative progress with influences taken from afrobeat, hip hop and contemporary r&b. Still, those latest music trends are blended in with melodic r&b that appeals to their original fan base. The first single from the album was “Don’t Leave” was a jump in time, but the latest single, “Virtuous Woman”, brings a combination of that 90s sound with the autotuned r&b vocals that we’re used to now.

All songs on the album are songs about ups and downs in relationships. But “Virtuous Woman” is two parted. In the preparation of the single release, Ruff Endz also started a movement turning this song to a message of love and praise to all women. They’ve used Women’s History Month to keep on praising and inspiring women before the video was finally dropped at the end of March.

Keep up with Ruff Endz