Kylie Minogue releases another greatest hits collection in time for her upcoming festival performances. “Step Back In Time” celebrates her definitive mark on pop music.

Listen to Kylie Minogue
Keep up with Kylie 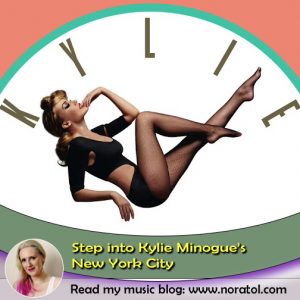 Of course, in true Kylie fashion, the collection features one ‘new’ track. The previously unreleased, “New York City”, was initially written and recorded for the album “Golden”. A snippet of the song was included on the tour, but the full track never made the album. Kylie performed the full song, while being in New York, and that’s how she build up suspension for the track among her fans.

Definitely, the song is very different from the “Golden” era, but it is every bit of a Kylie song you would expect. The country influences are tossed and replaced by an early 80s disco sound sampled from Mylo’s “Drop The Pressure”.

When Kylie announced her first Christmas album, I wrote a blog expressing my concerns about this idea. She can do things with such class and style, but she can also bring on the cheesy and camp if she wants. This is one of those tracks that’s right in the middle. My mood determines which way it swings. There are days I love it, there are days I can’t stand it. Overall, this is one of those songs that belongs to the collection, because it’s got her vibe on it.

In the past, there were numerous demo leaks. A lot of these songs are now as popular, among fans, as her hits. Therefore, Kylie has even performed some of them or released them, officially, later in her career. We’ve gotten used to this as much as we got used to being served albums with a collection of her songs. Every label she’s been on released a greatest hits or some other collection to get a piece of the pie. Hopefully, Kylie gets started on new music once all the festivals are done and we can hear the real new stuff.

Keep up with Kylie