The New And Improved Bianca Ryan

With Christmas still pretty fresh in our minds, Bianca Ryan was still fresh on mine. All thanks to “Why Couldn’t It Be Christmas Every Day”. Well, she is no longer a little girl. All grown up, she’s just released a new album to reintroduce herself to you.

Listen To Bianca Ryan
Keep Up With Bianca

I’ll start this blog by admitting I didn’t know Bianca Ryan was the first America Got Talent winner. I only know her from that Christmas song. It gets played over and over on the radio here, every year. Last year, I finally Googled who the singer was. She’s was just a name that didn’t ring any bells to me, but I figured she must live life like that character in some British romantic comedy. He lived a lavish life off the royalties from that one Christmas song he did. Ha! I stand corrected.

While everyone agrees that this lady’s got the talent, I see a lot of media respond indifferent to her. It’s almost an echoing of the feedback she got after her America Got Talent audition, when she was 11. “Change everything about you, then you’ll make it”. Well, Bianca is changing everything, little by little. The first taste of it, is served to you in her new album, “The Reintroduction, Pt 1”, released independently. 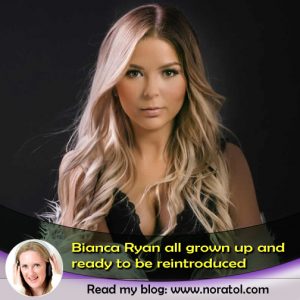 Now, at age 24, Bianca poses on the cover as a sexy young lady. Her brown hair is blonde and big. The Photoshopped white smoke, at the bottom of the picture, makes her look angelic. But as unreachable that she may look, she’s like every other 24 year old girl. Just look on YouTube, where she’s sharing her make up tutorials and vlogs. Just like the girl next door. The only thing that makes her different is her big, big voice.

Defining The Artist Within

“The Reintroduction” follows up her 2006 EP. That EP rode the success of her on the show, and mainly contained cover songs.

The current album is mostly filled with original tracks. Funny enough, the one exception is released as her current single. “Say Something” is a cover. Now, I understand releasing a cover is commercially appealing for an upcoming singer. Something familiar helps draw attention to you. But, at the same time, I think it defeats the purpose if “The Reintroduction” is supposed to be a statement to define the artist Bianca Ryan in sound and image. However, that said, the song appears to be her third release from the album. Original songs have preceded it.

Pop Star In The Making

The first two songs from “The Reintroduction” are very generic pop songs. The lyrics are edgy and catchy. It’s a definite step up in vocal abilities and musical maturity. “What I Gotta Do”, the previous single, channels 80s synth-pop and a little bit of early Lady Gaga. But it’s everything after the first two songs that sparked my interest.

Her self-written song “Alice” changes the mood of the album. It’s slightly alternative, and perhaps a little dark. The vocals and harmonies are great though! No wonder it did so well online. It definitely belongs on the album. Somehow, it lifts it to another level. I’m glad it’s not followed by the retro pop sounds of the first two songs, because the transition to “Don’t Wanna Come Down” is perfect. That song has got the power to balance out the breather “Alice” created (and makes her sound like Jess Glynne). Still, I would encourage her to step out the pop star limitations and write more experimental stuff like “Alice”. Nevertheless, it was a good reintroduction.

Keep Up With Bianca