Ten years ago, I was actually right there when Montell Jordan did some of his last performances as an r&b artist. In his dressing room, he announced his departure from music. Upon his return to the States, he pulled the plug on his music career and dedicated his life to religion. Every once in a while he did a performance at an r&b event, but recently, he suddenly announced a new single. However, this time is clearly different.

Listen to Montell Jordan
Keep up with Montell 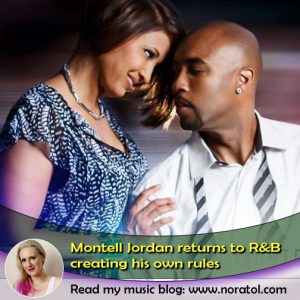 His story is one that has intrigued many. With so many people aspiring to get a party lifestyle suited for a show-it-all on Instagram, Montell actually gave it up for a simple life. I thought it was an amazing decision that made a lot of sense, when I heard it about after spending time with him and his friends in Amsterdam. I too, had walked away from something successful, because it was not fulfilling. So, the idea wasn’t all that crazy, as it seemed to other.

When I’m Around You

In his Unsung documentary, he spoke about not relating to his song topics about cheating and partying. I often wondered why he felt he had to keep that up. Couldn’t he write songs about the opposite? Well, it looks like this is exactly what we can expect from Montell this time around. His first single “When I’m Around You” is a testimony of a love that’s still there after a while. It brings that catchy, groovy vibe that we are used to from Montell. It’s a sound we’ve definitely missed within r&b music today.

The song is the lead and title song of a full r&b album and features his wife, Kristin, on the cover. He’s clearly painting a different picture for himself and,to be honest, I welcome this. It’s all possible now, because he’s doing it independently, which gives him full control. So, maybe it wasn’t his time 10 years ago, but sure looks like it is now.

Keep up with Montell