Mark Calderon goes solo, while Color Me Badd look like they’re on a break. His first single, “It’s Like Good Sex”, was released last week.

Listen to Mark Calderon
Keep up with Mark 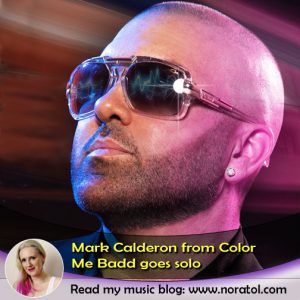 Mark Calderon Steps Out On His Own

The last time I wrote about 90s r&b group Color Me Badd, it wasn’t all that good news for fans. Just like many bands, they struggle to keep the group together. However, their struggle was becoming too apparent to the outside world.

Today, the group is completely divided. While Mark Calderon and Bryan Abrams still perform as Color Me Badd, Kevin Thornton and Martin Kember (who replaced Bryan, at some point) have formed a duo of their own. Court cases, arrests, leaked demo songs and a Dr. Phil appearance, among other events, complete this messy story, as is. Now, there’s a new development. Mark goes solo.

Mark announced his solo release on his social media platforms and followed up with new photos and his very own website. It’s only the next logical move for him, but don’t think that this means Mark is making hasty decisions. His debut single, “It’s Like Good Sex”, was released on May 16th and it’s taken me by surprise. Mark’s voice is soft and airy, which is put to good use on this funky song with a slight Nile Rodgers groove.

During his 90s Color Me Badd, people compared him to George Michael. He looked like he was his brother. I’m afraid I’m going to pull that reference out of the hat again, because “It’s Like Good Sex” sounds a lot like it could be a George Michael song. The song is catchy and is perfect for the summer.

Keep up with Mark