Home » Music blogs » Leave It Up To John Legend To Preach

Leave It Up To John Legend To Preach

Both John Legend and his wife, Chrissy Teigen, always show a great sense of involvement in social issues, but John has stepped up to really make a difference.

Listen to John Legend
Keep Up With John 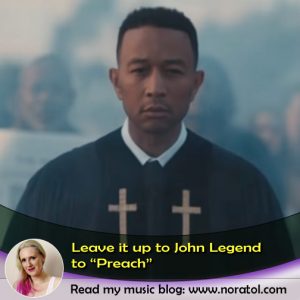 John Legend in video for “Preach”

How many of us wake up to the news feeling helpless? There’s so much injustice going around and craziness. We all talk about it, but many of us see a way to change anything. This is not the case for John Legend. He took pen to paper, his fingers to his piano, and released the powerful song “Preach”.

In the song, he describes the above, exactly. How we spot issues, feel helpless, but it’s not just time to preach. It’s time for action. Now, that’s something you can leave up to John. Unlike any other, he is able to shift people into action.

The song “Preach” leads a funding campaign for FREEAMERICA. In 2014, John founded the organization with a mission to end mass incarceration in the United States. On his YouTube channel, it’s explained as follows:

FREEAMERICA exists to amplify the voices of individuals impacted by the criminal justice system and those who are working to change it. By challenging stereotypes, breaking down barriers, and uplifting solutions, we are helping to end mass incarceration and invest in just, equitable, and thriving communities across the United States.

Currently, the funding goal is set at US$50.000 with a timeline of a year to reach it. However, the powerful video for “Preach”, which deals with all sorts of social issues, has such an impact, it’s raising money quickly. I think they’ll surpass their goal, given the timeline. The song itself is equal as powerful as the video. With its loud drums, strong background vocals, it enhances the message and makes you really feel you should do something. Well done. Maybe he should consider running for president….

Keep Up With John Legend