James Morrison and Joss Stone release their duet as lead single for James’ new album. With his raw blues-like vocals and Joss Stone’s nasal squashy sound, I wasn’t too sure of this combination. Would it blend or clash? However, the soul in their voices is the adhesive that makes it come together. And they go strong! 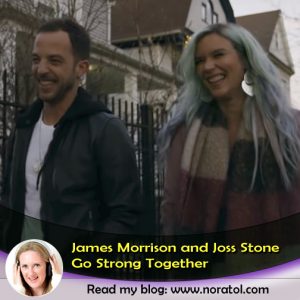 James Morrison and Joss Stone in their video

“My Love Goes On” busts out of the speakers with a high level of energy and something familiar to it. I still haven’t been able to put my finger on it, but the first verse partially reminds me of other songs. Upon hearing the song for the first time, I thought Joss got overwhelmed by James’ powerful voice. However, she is holding up.

The song is catchy and the additional background vocals in the chorus make the soul song turn gospel. The lyrics are about forgiveness, love and support. Musically, it’s a good, strong return for James. This is his first new music in 4 years and the single leads his upcoming album “You’re Stronger Than You Know”, which is due to release on March 8th.

He’s already been sharing some tracks from his new album on his YouTube channel (see below) and announced a new UK tour and festival dates for the summer. He’s come far to get back to the music. His last label dropped him, despite the album receiving good chart success in some European countries. It all caused a bit of a delay, but James is back and currently touring South Africa. For Joss, the song is the first new music since 2017, when she was part of a collaborative EP with African influences. She’s been on a journey to include world music in her soul, for many years. It’s unknown whether the duet with James will lead to more new music from her, but let’s hope so. The two go way back, BTW – James shared an old photo of the two together in the #10yearchallenge. They’ve both come a long way since.

Keep Up With James and Joss