How The Music Business Messes With Your Self Confidence 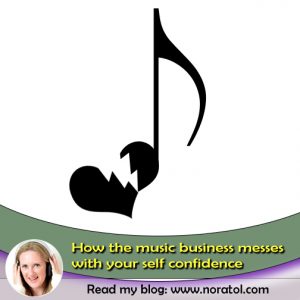 Eva Simons is considered one of the most successful Dutch female artists Holland has got. She gets this credit mainly due to her international collaborations and her massive hit, “Can You Feel The Love”, with Will.I.Am.

Still, a few months ago, Eva showed how tough her musical journey is. She broke down in tears during an interview explaining how the criticism got to her.

She’s not talking about the criticism from the press, or music fans, but from her own team; her own record company.

Watch the interview (in Dutch)

Today, it is good entertainment to see a talent get blasted on a TV show. The rougher the critique the better, it seems. We eat it up.

It’s easy to say that a judge just shows you how tough show business really is, but seeing it so openly lets others believe it’s OK to speak freely without any filter or consideration. After all, most people up on a stage do what a lot of other people don’t dare to do.

In the interview, Eva openly shared how her songs were always deemed not good enough for release. Even the song that kick started her international career, “Take Over Control” with Afrojack, originally wasn’t going to see a release.

Follow up singles were also on hold for release. It made her very uncertain about her capabilities as a singer and songwriter. I’ve also experienced this myself, which is why I wanted to blog about the topic she raised.

Remember when Erykah Badu said those famous words before singing “Tyrone”? Let me repeat: “I’m an artist. I’m sensitive about my shit”.

As an artist. No, actually, as a creative person, I open the door to criticism. I open it every time I collaborate, perform or let someone listen to my work.

Nevertheless, it’s amazed me how much of a thick skin I needed to have when I was trying to make a living on my music or songwriting. And how much I was left to figure it out on my own, as well. People were quick to judge, but not to teach.

When you enter this line of work with any form of self doubt – “maybe I can’t sing good enough” or “I’m not too sure about my lyrics” – that’s when the critics have got you. No amount of self confidence can hold up, because the criticism is ongoing. It comes from all sides.

The World Is Full Of Sensitive People

The one thing I’ve learned, is that no one actually really knows what works on an audience. Eva discovered this too with her Afrojack collaboration. She pushed on and it became a big hit, despite what her record company thought.

I once used MusicXray to test a track on an audience. They let like 20 people listen to a snippet of my song, as well as an equal amount of music professionals. Both rate it. The people loved my song and rated it high, but it got slammed by the professionals.

Music history is full of stories like this. A lot of good songs – classic hit songs – received much resistance by music professionals before they saw a release. And once they were out, the audience showed the professionals wrong. You see, the world is full of sensitive people…

BTW, if you need some help with your confidence, try this article: The Four Cornerstones of High Self-Confidence. That should put things into perspective for you and help you feel better.