When you see Jimmy Jam and Terry Lewis, they’re suited up and accessorized with black glasses and hats. Resembling the Blues Brothers, they’re actually responsible for putting an uplifting new rhythm into r&b and pop music. The impact they had on music is legendary and they are about to drop an album of their own. 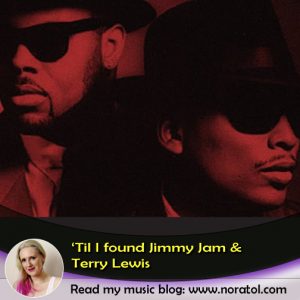 There are a ton of rumors going around about their upcoming album, “Jam and Lewis: Volume One”. So far, Jimmy Jam & Terry Lewis have worked with almost all major artists. With people like Janet Jackson, Mariah Carey, Boyz II Men, Gwen Stefani and Toni Braxton on speed dial, anything is possible for their debut album. The only thing certain, is their lead single, which was released early April.

Til I Found You

Jam and Lewis ease into this. Usually, there’s one act mentioned in one breath with them: Janet Jackson. Their collaboration is one that hasn’t only stood the test of time, but the 80s “Control” album changed music. At least it did for me, which is one of the reasons why Jam and Lewis have remained among my favorite producers, throughout the years.

So, to me, it seemed logical they’d enlist the help of Janet Jackson to launch their own album with a bang. Instead, they worked with the first act they signed on their own label in 1991: Sounds of Blackness. In fact, they’ve even reunited them with their former lead singer Ann Nesby. Together, they dropped a slow, but upbeat and gospel-like song called “Til’ I Found You”. The soulful song also includes one of the last recordings by Big Jim Wright, who passed away last year.

“Til I Found You” is reported to be a good representative of what’s on their album. The producers have a lot of experience to draw from. Their careers started in the 70s by playing in Flyte Tyme, later The Time. At the time of Janet’s breakthrough – and their big break as producers – they tried to form a new band, called The Secret, to release their own album. They talked about it to Rolling Stone magazine, but the project got tossed for other opportunities. Now, it really seems to happen. In the summer, their first album sees its release and the world is watching to see who’s on it!