Madonna is back with a new single and a new role to play, Madame X. The cha cha dancer and secret agent, who’s a little bit of everything. Madonna is as ambitious as always.

Listen to Madonna
Keep up with Madonna 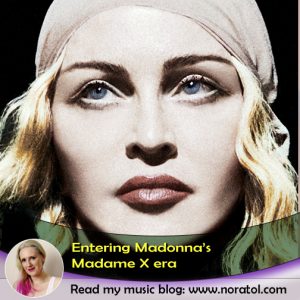 I’ve said it many times on this website: “I’m a Madonna fan. Been a fan since way back”. So, it goes without saying, I’m pretty excited to hear new music at all. This week, she’s released her first new single, in four years!

The cool thing about a new Madonna release, is that you really don’t know what to expect. Over the last years, she’s posted all kinds of short videos on her socials about her time in Portugal and I expected her art to go into the direction of world music. It sort of did, but in a trendy way.

As many are saying, “Madonna hopped on the reggaeton bandwagon”. Her single “Medellin” is a collaboration with reggaeton star Maluma.

This is dangerous territory for me. I’m not into reggaeton, but there are a few exceptions within the genre that I like. Also, just because I’m a Madonna fan, doesn’t mean I like all her stuff. Since the American Life era, I’ve had more trouble getting into her concepts, lyrics and her music. And again, with exceptions.

It just so happens that “Medellin” reunites Madonna with her American Life collaborator Mirwais. Therefore, it’s not your average reggaeton song. At first listen, I found the song to be messy and long, but I loved the reggaeton bits. Works great for the summer! Without giving it a second try, I kind of slammed it a bit on Twitter, in response to someone asking:

I love that she’s back. I love the reggaeton parts, but I don’t like the verses & the auto-tune. Not sure about the counting in it, but I understand why she put it there for context of the character. I think a remix of it might work better.

It Grows On You

The perk about this being a Madonna song, is that it gets more tries from me. I assure you, it grows on you the more you play it.

I still think it’s a bit of everything rolled into one. It’s a bit of Mike Posner’s “I Took A Pill In Ibiza” (it’s hinting at it in the lyrics). There’s a bit reggaeton blended with electronic dance music. Madonna’s vocal melodies remind me of her last albums, but now include the Madame X character in it (in the form of counting and cha cha chas). And then there’s way too much auto-tune and pitch correction. To me, the verses really sound like she probably sang another melody and they changed it in the mix. There’s some unnatural flows happening there.

Altogether, if I would to play this over and over again, I’d probably get brainwashed and end up absolutely loving it, but it simply doesn’t appeal to me right away. Maybe Madonna is better connected to the latest musical trends than I am. She sure is ambitious enough to keep up with it and that’s something I so appreciate about her.

Luckily, the music press seems to like the song and that’s an interesting thing to see happen. Her new album might actually do well then.

You see (pun intended), “Medellin” is leading into the album “Madame X”. The tracks have also been announced this week, which gave away her collaborators. Judging on the names, it looks like her whole album has a Latin feel. However, according to her own words, the rest of the album will be different from the single.

The video for the song will be dropped next week.

Keep up with Madonna