YouTube singer Desmond Dennis is well known for his Boyz II Men or R&B medleys. He’s even nominated for this years Shorty Awards. Now, he makes kids songs sound cool as he reworks them to R&B and pop tracks that adults can also enjoy.

Listen to Desmond Dennis
Keep up with Dennis 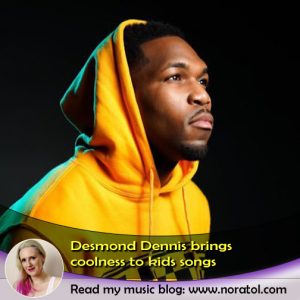 Desmond’s living proof of how much change a few years can bring. My last blog about him, from 2017, talked about him trying to transition from cover songs to original music on YouTube. As a songwriter and producer, it’s natural Desmond wanted to. But then life happened. In particular, fatherhood happened, and that put another idea in his musical brain.

It’s All About Kids

Inspired by his new family life – and YouTube launching YouTube Kids – he created a new channel with his own versions of popular kids songs.

Chances are, he also discovered that some of these children’s songs are put on repeat. Therefore, becoming annoying to adults. For the singer, there was only one solution. To create kids songs that are cool and fresh, and it’s a stroke of genius!

In 2 years, he dropped 3 full albums filled with cool kids jams. Short little nursery rhymes are turned into full R&B tracks with the harmonies he’s known for. Suddenly, everything sounds up to date.

The children’s music is only an addition to all of his other activities. Covers, medleys and original songs still get uploaded to his regular YouTube channel. Also, he discovered the power of duets. Other YouTube singers are often featured now, as well as other members of his former boy band, like on the Soul IV Real cover, “Candy Rain”.

The Next Best Thing To A Boyz II Men Collab

Recently, he even worked with the sons of Boyz II Men’s Wanye Morris, to make things come full circle. Wanye’s 4 sons are turning into a mini Boyz II Men. They work under the name WanMor and they sound tight. This is proven, once again, on the cover of “End Of The Road” with Desmond.

It All Falls Into Place

Additionally, Dennis enjoys his first big success with his songwriting. His song for Cardi B, “Ring”, is certified platinum. Little by little, Dennis reaches everything he wanted. Luckily, he’s not shy to share it all along the way.

A few weeks ago, he also shared a slew of tutorials sharing his trade secrets, like how he records and mixes his vocals, and how he comes up with his harmonies. As you know, this is something that makes me very happy. And happy is also a place where Dennis is. With his single “Since I Met You”, he announced his engagement to his girlfriend. Congrats!

Keep up with Desmond