Get Curious About Amerie

Amerie starts new phase in music career as she departs her signature sound. Good or bad, it’s a brave move that shows her character.

Listen to Amerie
Keep up with Amerie 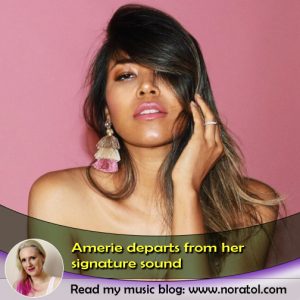 If you don’t remember her, you’re sure to remember her breakthrough hit, “1 Thing”. With that song, she threw a curve ball to r&b music as we knew it.

In the midst of the heyday of smooth r&b, Amerie came and swept everyone in a different direction. “1 Thing” mixed funk, soul, r&b and pop. It was attention grabbing with a shout-it-out-like method of singing. Everyone wanted it and its affect still transcends in today’s music.

It’s all a testament to her skills as a songwriter. Amerie is a writer at heart anyway. Personally, I’ve not kept up with her career, so I didn’t know this until I researched her for this blog. I’m quite impressed by her. Parts of her creative focus is something I have in common with her. But that aside…

Not Sticking To 1 Thing

Clearly not sticking to one thing in life, she’s not stayed in her lane in music either. Amerie experimented with many sub genres of r&b, but her albums always delivered something in the line of “1 Thing”.

In 2018, she dropped a surprise release of new music in the shape of two separate EPs,”After 4 AM” and “4AM Mulholland”. Both EPs are in supporting of each other.

“Curious” is its current single, which has now been accompanied by a video. I’ve wondered whether to write about it, because I’m actually not too impressed by the song nor the video. To me, both are wrapped in a laziness by its intended vibe (I got that), but the video only has a few shots on repeat and the song doesn’t seem to get going either. I’m just more impressed by her as a person and her story. That’s something to get curious about.

All tracks on “4AM Mulholland” are slow and contemporary. With airy vocals, it’s like a reinvented lounge album to play late at night or on a lazy Sunday. A sharp contrast to her previous work. It features trap and hip hop influences combined with r&b. In short, it contains lots of long notes and auto-tune. This EP is a mood you have to be in for. It’s down to personal taste, but I strongly prefer “After 4 AM” and don’t think I’ll play “4AM Mulholland” again.

Effectively, “After 4AM” feels a lot more positive to me. She still sings the long notes in those airy vocals and it still houses digital vocal effects. However, the music is upbeat compared to “4AM Mulholland”. This makes it a lot easier to listen to. It offers more variation. Here, she dropped the trap influences and replaced them with modern r&b.

Both EPs show that Amerie has no problem connecting to today’s musical scenery. As an independent artist, she took the freedom to create something other than what we’re used to. I appreciate that. Most likely, I’d rather follow her on YouTube right now, than play her current music. Again, that’s down to personal taste. Go ahead and listen to see what you think.

Keep up with Amerie