Beyoncé In The Spirit Of Disney’s The Lion King

Beyoncé provides the voice of Nala in the live action version of Disney’s “The Lion King”. The Disney collaboration is golden, especially now the first songs are released.

Listen to Beyoncé
Keep up with Beyoncé 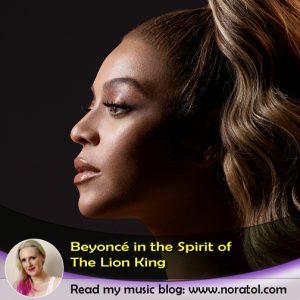 A Touch Of Beyoncé

When I first heard Beyoncé was involved with “The Lion King”, I felt a little worried about where it could go. I consider her one of the most innovative artists of our time. Jam-packed with the talent to back it up. However, I wondered how much her involvement would reinvent the music within “The Lion King”. Especially because she’s producing herself. Would this make the soundtrack get a hip hop sound?

Inspired By The Lion King

So far it looks like Beyoncé embraced the movie. From what I understand, she’ll release a Lion King themed album of her own. Inspired by the movie, she’s taken the opportunity to further embrace her African roots in music. Reportedly, “Spirit”, her new single, gives us a taste of what’s to come.

That can only mean great things, because “Spirit” is an impressive song that mimics “The Circle Of Life”. Her vocals remind me of Emeli Sande (and I know I usually say Emeli sounds like Beyoncé, so this comes full circle now). I don’t think I’ve ever heard Beyoncé draw from her full vocal range in one song. She’s pushing her lowest low notes and her highest high notes. Therefore, the song is a show stopper movie song that comes close to “Listen”.

Can You Feel The Love Tonight

Ofcourse, Disney redid the full soundtrack to the movie, which even features Elton John. Originally, he wrote songs for the movie in the 90s. It was the first time a collaboration of this kind happened for a Disney movie.

Anyway, Beyoncé’s version of “Can You Feel The Love Tonight” is also released by Disney today. It’s a duet with Donald Glover, who plays Simba. Everything makes me pretty excited about the movie. I can’t wait to see it.

Keep up with Beyoncé