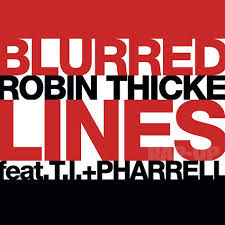 I might be a little quick to call this a classic this soon, but the song has been played non-stop for at least a year and was – until recently – the most downloaded song EVER in the UK.

Robin Thicke’s “Blurred Lines” really put him on the map and managed to catch the vibe everybody seemed to love. Well almost.

Both the track itself – as well as the video – received a lot of criticism from women’s rights organisations. They find the lyrics to be pro rape and the video was found to be showing too much unnecessary nudity. Recently, Pharell Williams, defended the video.

Both Pharell Williams and Robin Thicke are defending the song’s originality with the relatives of Marvin Gaye in a court battle. The estate thinks it’s an exact copy of a Marvin Gaye song called “Got To Give it Up”. Due to this, a lot of information gets published about how this track came together.

Unlike with other classics, I really wonder if this is the kind of information I ever even wanted to know. Thicke is distancing himself from the track as a writer. Now, he’s claiming to only have been in the room, when Williams wrote the track. According to him, getting credited as a writer is just how the business works nowadays.

Altogether, he says it was a bit of blur anyway, as he was the under influence of prescription drugs and alcohol. That didn’t really help, of course. So, Thicke’s recently started doing some damage control regarding his earlier statements. It’s just one of those things you didn’t want to know about a classic.