Home » Music blogs » All The Songs That Made Will Young Return

All The Songs That Made Will Young Return

Will Young released a new song called “All The Songs”. After years of not paying attention to him, I’m quite surprised by his artistic growth.

Listen to Will
Keep up with Will 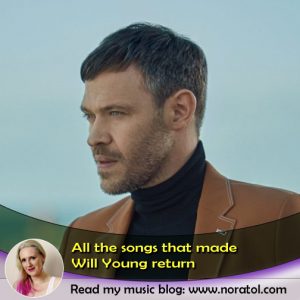 Will Young back from retirement

Will Young, The Pop Idol To Be

Sometimes, I’m blown away. Recently, when I researched Louise for my blog about her, I also ran into Will Young. Just like Louise, he starred in Cabaret. He played the shows MC.

To me, Will Young is the singer, who won the first series of Idols, ages ago. He became a bit of a one hit wonder. I only remember “You And I” and “Leave Right Now”. I don’t recall hearing anything after. Though I know he remained a celebrity in the UK.

Then, I ran into a video of his performance with the Cabaret cast. Now, that didn’t look like a pop singer, who was just doing it for that one night! Intrigued to find out more, I stumbled upon a new single, “All The Songs”. Also an interesting move.

At the start of his career, I found his voice to sound a bit thin and squeezed. It was one of those voices well suited for pop music, at the time, but it just wasn’t one of my kind of voices to listen to. As I watched his Cabaret performance, I was amazed how it all came together. This is a seasoned performer, who’s grown in his craft. I would’ve never imagined that, back then, but all together he’s now got 18 years of experience behind him.

Today, Will is a singer, actor and podcast host. With his podcast series coming to an end, he originally hadn’t planned a return to music. A few years ago, his last album was released and he had publicly stated that his music days were over. But now, his 7th studio album, “Lexicon”, is set for release in June. Around that time, he’ll do a couple of gigs in the UK before embarking on a proper tour on October. Guess he’s back.

“All The Songs” is the first single from the album. The song mixes a little bit of dance music with today’s mainstream pop songs. It’s very catchy, but contradicting. The song sounds upbeat, but the lyrics tell a different story. And the video even more.

The song’s story of getting reminded of an ex and battling the hurt, doesn’t come back in the video. The video couldn’t get more departed from the topic and it couldn’t get more cheesy. Will plays various characters and strips down naked. If you’re not into it, stream the song in another way. As grown up and mature as he looks on the album cover, this video still shows he’s got some boyish streaks in him.

Personally, I think the video takes focus away from a pretty cool pop song. I guess that means that despite getting impressed by his improved skills, I still haven’t turned into a fan.

Keep up with Will