Adam Lambert brings Cher to tears with her own song. In a captivating performance at the 41st Annual Kennedy Center, Adam honors Cher and shows us why he’s still working, ten years after American Idol. 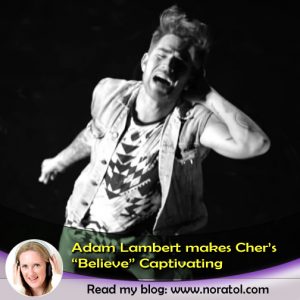 There’s no denying that Cher’s song “Believe” changed music, or rather the way we like to hear voices on music. Its iconic use of auto tune sparked a whole generation to never sound authentic again. Love it or hate it, nothing else has made music sound more contemporary as auto tune. There’s no getting around it, so even living legends, such as Paul McCartney, are using it on their vocals.

All that said, I don’t think anyone dared to look at Cher’s “Believe” differently than as an iconic dance anthem. No one, but Adam Lambert.

Back in the day, when he was unknown, Adam Lambert already saw the potential of this song. He rearranged it into a piano ballad for his third round of American Idols, exactly ten years ago. Then, he was still in the grips of his theater career, but now, with so much music stage experience under his belt, he refined his version. The theater actor turned rock singer delivered a much more controlled vocal performance at the John F. Kennedy Center for the Performing Arts, Washington, DC, USA in the presence of Cher. Like, no pressure!

The American Idol piano version of “Believe” got turned into a contemporary pop ballad that would grip anyone’s attention. He managed to dose his theatrics and let it out of the bag exactly in the right spots. Adam’s full focus at the beginning of the song, makes place for more enjoyment and confidence (a little over a minute into the song), once he realizes his audience is compelled to watch and listen. His skills are showcased to his peers and Cher is brought to tears (that rhyme was intended, haha). It’s definitely worth a view (see below).

From Queen To King

After his success performing with Queen, last year, you can see Adam Lambert on TV on February 17th as he pays tributes (with other stars) to Elvis Presley on NBC.

Keep Up With Adam